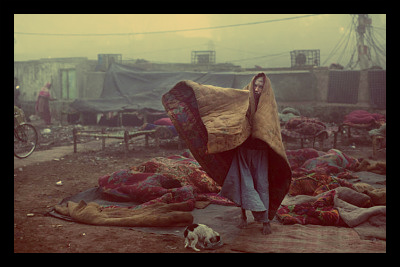 Across India, poverty is an incredible problem. The World Bank estimates 33 percent of its population lives on $1.25 or less a day. With a population count of around 1.2 billion, that leaves 396 million people living in poverty. The figure represents the largest share of the world’s poor that any nation carries. India’s Planning Commission disagrees, however, as they released a report in July citing a poverty rate of just 21 percent resulting in a difference of 100 million people.

Such a stark contrast in calculation can be attributed to how India has chosen to decide who is poor. By the Planning Commission’s definition, anyone making 33 rupees or less a day is living in poverty. That equates to just $0.52 to survive off a day or around $80 a month for a family of five. It is no mystery why such a low standard is the subject of criticism and even protest. Thirty-three rupees might buy you three bananas or one kg of tomatoes. To get to a balanced 2,000 calories, one would need a little less than 200 rupees. Cut out the meat and cheese from that diet, like many Indians are forced to do, and that figure drops to 100 rupees, 3 times what the Planning Commission considers poverty. One can see how UNICEF reports a third of the world’s malnourished children live in India.

India’s Census Bureau reports more than 65 million living in slums or housing unfit for humans due to a lack of access to clean water, non-durable housing, insufficient living area, and a general lack of basic sanitation. With such widespread poverty, one independent report finds 77 percent of the population in poverty or at risk, it is quite a task for lawmakers in the nation’s capitol to alleviate the problem and setting the bar inhumanely low for the allocation of subsides does not provide a solution.

New Delhi is a giant sprawling metropolis with plenty of examples of poverty and hardship for policy makers living in the capitol to draw on.  According to India’s 2011 census, the National Capitol Territory of Delhi has 16,787,941 residents of which 3.9 million live in the slums. Independent reports put this number closer to 8 million. Thirty-two percent of India’s urban population lives in one room housing. In New Delhi, where a dilapidated one room apartment can cost $75 a month or more, many of the poor are homeless or sleep in parking lots where they receive a blanket for about 30 rupees a night. Assuming they also spend to eat, even those who are reduced to sleeping on pavement would not qualify as poor per India’s Planning Commission’s definition.

Much of the city’s workforce makes $100 a month or less and lack access to decent housing, education, and even access to plumbing or clean water. Though New Delhi boasts the country’s highest literacy rate of 86 percent, 70 percent of the illiterate live in the slums. The city faces a daily water shortage of 207 million gallons from government-run water treatment plants. Some 4 million people lack access to piped in water and survive off rationed, tank water. Because of inadequate plumbing, many are forced to defecate in public at railways. Access to transportation and the internet is sparse as well but less of a concern for New Delhi’s many poor.

In the heavily crowded North East district, also home to many slums, 3.2 million people live at an astounding population density of 37,346 people per sq km. That’s more than ten thousand people denser than Manhattan, the most tightly packed county in America. New Delhi capitol district, where one can find most government offices and government employee housing, has just 3,820 people per sq km and few of the myriad deprivations much of the city’s population faces, perhaps making it difficult to see the true extent of poverty in New Delhi.