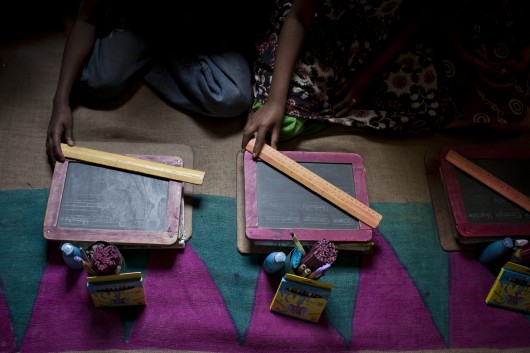 Statistically, if you walk up to someone randomly and ask them to read aloud your favorite T.S. Eliot poem, nine times out of ten that stranger will be very embarrassed by the prospect of reading aloud, and a staggering one out in ten won’t be able to read the poem at all.

According to a new report by the World Literacy Foundation (WLF), a staggering 10 percent of the world’s population is either completely or functionally illiterate, meaning they can’t perform basic tasks like reading a medicine label or balancing a checkbook.

Globally, more than 796 million people are illiterate, and according to the WLF report, this year alone it will cost the global economy over one trillion dollars.

A rare uniting factor between countries with great wealth and those with very little, illiteracy around the globe traps individuals “in a cycle of poverty with limited opportunities for employment or income generation,” said the report.

Aside from being unable to do simple things like read a nutrition label or fill out a job application, the WLF says poor literacy also affects a person’s ability to engage in critical thinking activities. Examples of these include understanding government policy and voting in elections, analyzing advertising and recognizing scams, and of course, the ability to pursue higher education or advanced training.

All of these hurdles placed before the illiterate severely hamper their ability to be as socially and economically productive as their literate counterparts. Illiterate people earn up to 42 percent less due to difficulties with communication and handling tasks that require some degree of literacy.

Illiteracy places even more strain on society by creating barriers to healthcare and financial planning for the illiterate, which can lead to increased crime rates or welfare dependence.

“One can put figures on the social cost in terms of welfare payments or the burden on the health system. But the real opportunity cost will never be known. These are the costs of lost opportunities to create individual financial wealth, encourage entrepreneurs, build healthier and more stable families whose members can make a productive contribution to all areas of society (political and cultural as well as economic),” said the report.

A formula developed by the UN’s Educational, Scientific and Cultural Organization estimates the cost of illiteracy to a country at 0.5 percent of their GDP, meaning the wealthier the country, the more dramatic the impact. The U.S. alone stands to lose an estimated $362 billion this year due to the combined costs of illiteracy.

Ensuring access to quality primary education for all children is critical to improving literacy levels globally, and reversing the economic drain it creates, says the World Literacy Foundation. Progress has been made, said the organization and initiatives like the Millennium Development Goals and the recent Sustainable Development Goals are drawing attention to the issue, but more needs to be done, according to the WLF.

The WLF offered some recommendations in their report to bolster the current efforts to eradicate illiteracy. These included: establishing adult and parental literacy programs, establishing programs to attract and retain students in schools, and ensuring access to quality resources, training and technologies to students.

The organization even went so far as to suggest that if the global economy is going to “literally throw away money” through inaction, that it might as well actively invest in literacy programs.