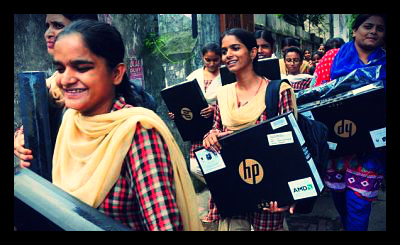 With the intention to win elections, politicians in India have seen fit to provide their constituents with gifts that are especially beneficial for those living in poverty.

Before elections, starting in 2011, Chief Minister of Tamil Nadu J. Jayalalitha gave $322 million worth of freebies to the southern Indian state consisting of roughly 70 million people.

“Freebies are a fact of life in Indian politics, and items like livestock are only part of it,” states an article by the Associated Press. “All three parties seen as the front-runners in upcoming elections have enticed voters with subsidies on electricity, cooking gas or grain.”

However, the article also states that concerns about providing people with free stuff are growing because such action may harm both the economy and government finances. For instance, economists are worried about the new $805 million cooking gas subsidies that were announced by the government.

This is not the first time that freebies have raised public concern. People have, in the past, questioned whether the act of giving people laptops, cows and subsidies in order to win elections is corrupt. In July 2013, judges of the Indian Supreme Court said, “Freebies shake the root of free and fair elections to a large degree.”

Under Section 123 of the Representation of the People Act, giving people freebies cannot be regarded as a “corrupt practice” because they can be viewed as “promises made in an election manifesto.”

Nevertheless, voters in India welcome the freebies due to the high cost of living. Apart from being the world’s biggest democracy, the Associated Press reports that around 270 million people in India live in poverty. This amounts to 22% of a population of 1.2 billion people.

According to an article by the Telegraph, the World Bank estimates that “India now has a greater share of the world’s poorest than it did thirty years ago” despite the decline of people living in extreme poverty worldwide.

This is a problem in the long run because the economic growth in India is unable to keep with the growing population rate. By 2016, India is expected to be the world’s most populous nation with at least 1.5 billion inhabitants.

To make things worse, there is a perception in developed countries that India has a fast-growing economy. The Telegraph states, “The United States has announced a 16[%] reduction while Britain has announced it will end its £280 million per year aid programme.”

Granting that India’s economy is unable to keep up with its population growth, the U.S. should reconsider its proposal of cutbacks if it wishes to help the nation out of poverty.

Sources: The Hindu, The Telegraph
Photo: The Hindu

Dalai Lama: Non-Violent Resolve to Tibetan OppressionCommon Cold Remedies from Across the Globe
Scroll to top