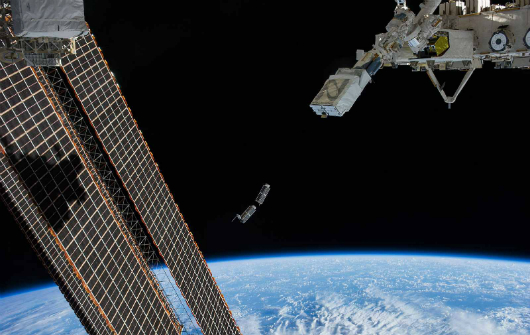 Born in San Francisco in 2012, the startup envisioned what it would be like to create a cheap, simple spacecraft that could work with other tiny crafts to deliver real-time monitoring of the planet. The goal was to help people make more informed decisions about their impact on the earth. Fast-forward three years and today, Planet Labs’ mission is, “Fresh data from any place on earth is foundational to solving commercial, environmental, and humanitarian challenges.”

By “using space to help life on earth” Planet Labs creates tiny shoebox-sized satellites they call “Doves.” In January 2014, it launched Flock 1. At 28 Doves, it was the largest collection of Earth-imaging satellites ever sent to space.

Information technologies have the power to monitor local and global development for humanitarian and commercial use. They also provide mass appeal to those without access to such information. At the same time, the Doves are meant to canopy the earth at heights low enough to see treetops but high enough to conceal personal privacy.

The Longyangxia Dam Solar Park in China is one of the world’s largest solar power plants. Settled in China’s Qinghai Province, the park produces nearly 320 megawatts of power. Planet Labs imagery assists in monitoring these large facilities for environment and social impact that would otherwise be undetected.

Planet Labs curates galleries of images for monitoring global development. It “makes global change visible, accessible and actionable for those who need it most.” Providing universal access is one of Planet Labs’ missions, all of which are at affordable costs.