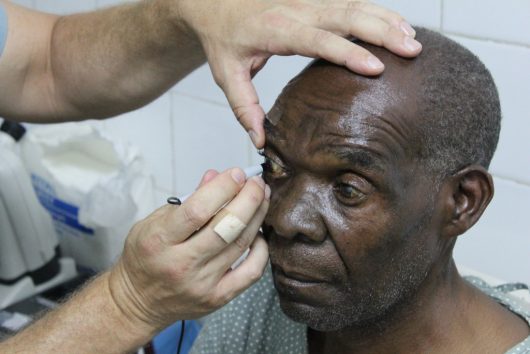 Approximately two billion people struggle with impaired eyesight. However, many people in remote areas of developing countries go without vision care because of the high cost and lack of access to medical facilities. According to the Center for Vision in the Developing World, “The developing world cannot yet support the conventional optical industry’s business model.” This is where Peek Vision‘s Portable Eye Examination Kit smartphone software can be instrumental in bringing vision care to impoverished areas.

Once the software is installed, multiple apps on the phone can be used to screen the patient’s eyesight. The smartphone is also paired with a lens adapter to take high-quality photos of the patient’s eyes. Peek Vision states that the apps can view the retina with high-quality imaging, see cataracts clearly for classification, simulate a patient’s eyesight on screen, conduct visual acuity tests as well as color and contrast tests. Before placing it on the market, PEEK software have been tested to ensure accuracy.

Between December 2013 and March 2014, Peek Vision CEO Dr. Andrew Bastawrous conducted an experiment that included 233 participants in central Kenya who suffered from Nakuru eye disease. Half of the participants were given multiple eye tests in a clinic and the other half were tested at home with the Peek Acuity app, one of the multiple apps in the Portable Eye Examination Kit. The results showed that the Peek Acuity app did just as well as the more expensive and extensive tests available in the clinics.

Just in 2015, the app was used in 50 schools in Kenya to screen 20,000 children in a span of two weeks. The app found that 900 of children tested were visually impaired. These children were unaware of this before the screening. Peek reports, “By using Peek, teachers were able to identify pupils who needed help and ensure they were referred for specialist treatment.” Without the app, these children could have possibly gone on longer without receiving vision care.

PEEK software also has the ability to create a database of patients. The photos, diagnosis, personal information and location of the patient can be securely stored in a database. This makes follow-ups easier. Also, it allows for patients to get glasses, medication and other needs to better their vision quickly since their information is readily available.

By turning a smartphone into a vision screening device, the Portable Eye Examination Kit is allowing for easier, cheaper and faster testing for people in remote and or impoverished areas.