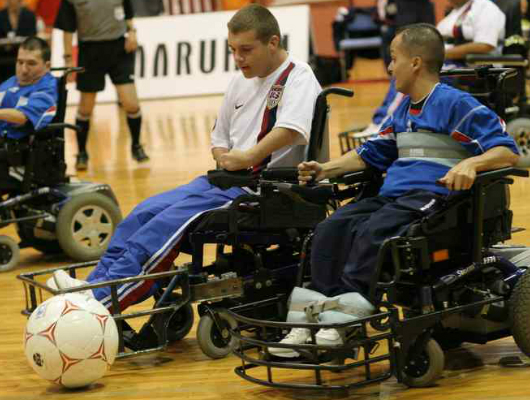 Nigeria has recently reached the milestone of being polio-free for a year, however, the disease has left thousands of survivors handicapped. Although there is not a definite number on polio survivors in Nigeria, the Nigerian Association of Polio Survivors has almost a million members.

Musbahu Lawan Didi, a polio survivor, originally created para-soccer in 1988. It was called ground handball at the time. After the Nigeria Association for the Disabled (N.S.A.S) heard about the game, it was promoted and expanded internationally.

The Women Federation of World Peace (WFWP) brought attention to the sport as well when the organization helped set up matches for the teams.

The first lady of Adamawa State, Dr. Halima Nyako, also helped in spreading the name of para-soccer. She sponsored the compilation of the rules and regulations into a booklet.

Slowly but surely the sport began to build. The Federal Ministry of Sports and Social Development officially approved the Para-soccer Federation of Nigeria to be a national sport federation in 2006.

Now the sport has international leagues in Ghana, Niger and Cameroon as well as national leagues within Nigeria. There are more than 24 state associations involved in para-soccer.

Through para-soccer, survivors who would otherwise be begging on the streets are able to make some money to help support their families. “Para-soccer has been an effective alternative to polio victims begging for alms to survive,” Didi said in a speech during the National Para-Soccer Championship in 2013.

Para-soccer is also being used as a tool to spread awareness about polio and the importance of vaccinations. Every year on World Polio Day there is a national para-soccer championship.

Developing World Connections: Poverty-Alleviating Projects How Renewable Energy Leads to Opportunities for All
Scroll to top