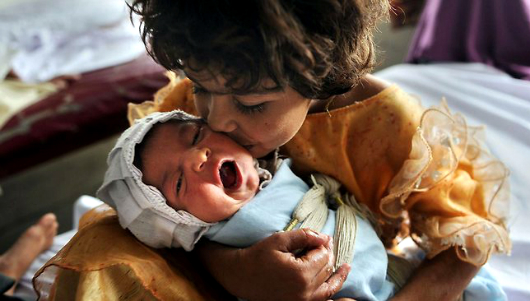 Save the Children is a U.S.-based charity that works to help children in need. They work in 120 countries and are able to reach 166.8 million children. Some of the goals of Save the Children are to provide more widespread access to education and reduce the deaths of children and newborns that are caused by preventable diseases.

Save the Children has been in Pakistan, where many people are suffering, for more than 30 years. The average parent in Pakistan earns $3 a day, and the average girl drops out of school by the time she reaches the age of seven. Pakistan also has a high under-five death rate: 86 out of 100 children die before they reach the age of five.

Pakistan has benefitted from the work of Save the Children. They have provided shelter kits and food to some of the 250,000 people who were forced to flee from their homes due to the fighting between the Pakistani government and armed groups in the Khyber Agency. Save the Children also helped Pakistanis who were suffering from the effects of the 2010 monsoon floods by providing shelter, medical aid, education, food and other relief.

According to their website, Save the Children protected 83,109 Pakistani children from harm in 2014 alone. They also supported 880,601 children in times of crisis, provided more than 1 million children with a healthy start in life, assisted 42,420 families with feeding their children and gave 158,326 children vital nourishment.

However, Save the Children’s relationship with Pakistan has not always been peaceful. In 2012, the Pakistani government accused the nongovernmental organization (NGO) of administering the fake vaccination programs that the U.S. Central Intelligence Agency used to track down Osama Bin Laden, the Al’Qaeda chief who was killed by U.S. Special Forces in 2011. Save the Children claimed that they were not involved with the vaccination programs or affiliated with Pakistani Dr. Shakil Afridi, who ran the programs.

Nevertheless, as Time Magazine states, Pakistan has in recent years become increasingly worried that international NGOs are overstepping boundaries and attempting to implement the agendas of foreign governments. Therefore, on June 11, the Pakistani government shut down their offices in the capital, Islamabad, and blacklisted Save the Children as an NGO working against Pakistan’s national interests.

Pakistan then retracted their decision, and on Sunday, June 14 they suspended their order to shut down Save the Children’s offices. It is unclear what caused this reversal. While Save the Children is welcoming of the change in decision, a representative from the organization expressed the charity’s frustration with the fact that the Pakistani government has not been communicating with them officially and instead shut down their locations without a formal announcement.

The Pakistan Interior Minister, Chaudry Nisar Ali Khan, stated that NGOs operate beyond their remit with the backing that they receive from the United States, Israel and India, and warned that local NGOs “should be scared” if they are using foreign funding for foreign agendas.

Save the Children has, for the past 18 months, refrained from using foreign staff in Pakistan. Instead, all of their 1,200 workers in Pakistan are Pakistanis. While it is beneficial to Save the Children that the order to close their offices has been suspended, it is unclear whether tensions between foreign NGOs and the Pakistani government are going to deescalate anytime soon.