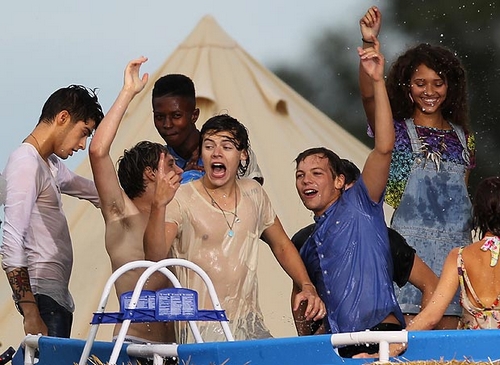 Action/2015 is a coalition of 2020 organizations around the world who undertake issues such as poverty, inequality and climate change. By raising awareness of these issues, they hope that world leaders will affect change.

“Young people really do have the power to help end poverty, tackle inequality and to stop dangerous climate change. Now is the time for us to unite, take action and raise our voices to show that we care about the future of our planet,” the band says.

The band is encouraging fans to post videos where they describe the kind of world they want to live in. The members also participated and posted their own videos.

Louis Tomlinson says, “I want to live in a world where every child can see a doctor when they’re sick.”

Niall Horan and Liam Payne say, “We want to live in a world where every young person has the same chance to fulfill their dreams.”

Harry Styles says, “I want to live in a world where every child can go to school.”

Action/2015 hopes that One Direction’s fan base will allow young people to contribute to global conversations, especially with the upcoming U.N. Summit in New York this September.

Brendan Cox, a participant in action/2015 says, “One Direction is the biggest band in the world and by mobilizing the millions of young people in their fan base they’ll shine a light onto the most important issues of our time.”

The band has already received 77,756 videos. They say, “Time and again our fans have shown how creative and powerful they can be when they unite and that’s why we want to all join together to speak out and hopefully make a real and lasting change to the world around us.”