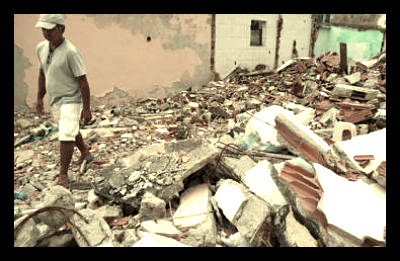 Brazil has the strongest economy in Latin America with an extremely important agricultural and industrial influence, but there is still a large amount of poverty in the country. The main cause of the majority of Brazilian poverty is the problems concerning social exclusion and income inequality, though there have been recent improvements with the distribution of income.

Even though Brazil would be classified as a middle-income country with plenty of natural resources, the human development indicators and poverty levels in the poor rural areas are very similar to those of other impoverished Latin American countries.

In Latin America, the largest concentration of rural poverty is in the Northeastern region of Brazil with 58% of the region living in poverty.

In the poor rural communities, citizens are deprived of sufficient sewage systems, adequate water supplies, infrastructure and technology, and strong education and health facilities. Women, youth and indigenous people are among the poorest and most vulnerable of the Brazilian rural areas. Many women have the responsibility of managing the family farm as well as taking care of their children because they are either single mothers or their husbands are out looking for work; households like this make up 27% of the rural Brazilian poor. These people are living in poverty mostly because of inequality of land and the lack of access to formal education.

In preparation for the 2016 Olympics to be held in Rio de Janeiro, the Brazilian government is taking steps to clean up the city and rejuvenate the area. Though this is good for bringing in revenue from the tourism that will come with the Olympics, the improvements to the city are at the expense of the nearby poor.

Hundreds of thousands have been relocated to make room for the expansion that has begun for the Olympics. The government is expanding the roads and metro lines in addition to renovating the airport in order to make it easier for tourists to travel while in the country.

Many families are offered a proposition by city officials that they really cannot refuse. They can either take a small compensation package or they can simply leave with nothing. If they take the compensation package, they agree to move to a small apartment in a housing project that is very far from where they work, but that is at least better than leaving without any compensation whatsoever. Often times, housing projects like these cannot continue to be maintained because the people living in them do not have the money to pay maintenance fees, so these people are not necessarily making improvements to their lives by moving.

There are varying numbers of how many people have been moved out of their homes, but Amnesty International claims around 19,200 families in the Rio de Janeiro area alone have been forced to relocate since 2009. Rio authorities, on the other hand, claim to only be relocating 278 families that are living where the Olympic Village is being built. There is a large gap between these numbers and it is seemingly the poor that are ultimately paying for the big events to come in Brazil.

Hungry Planet: What Does the World Eat? Summer Internships in Seattle
Scroll to top