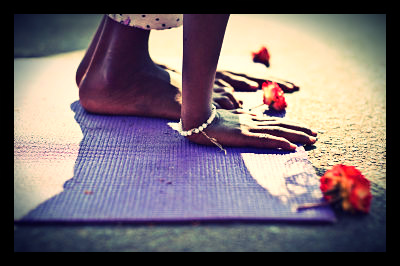 Odanadi, founded 20 years ago by two former journalists, combats human trafficking through spreading awareness, rescue missions and rehabilitation of former victims. Part of the therapy involved in rehabilitation involves yoga, practiced to maintain physical and mental strength, and it allows those who have been physically abused to reclaim their bodies.

For the last five years Odanadi has advertised a global event called Yoga Stops Human Traffick; participants bring their yoga mat and dedicate their practice to raising awareness on behalf of those who have survived so much at the hands of traffickers. Odanadi claims that those who take part in of their 105 events around the world are “demonstrating [their] solidarity and support for [former victims of human trafficking], as well as sending a message of defiance against a world which allows these horrific abuses to take place.”

Last Saturday, on March 15th, yogis in 26 countries rolled out their mats at home, in yoga studios, shopping malls, parks, and beaches to spiritually join those in Mysore Palace for 108 sun salutations.

The annual event also offers an opportunity to raise funds for Odanadi, and in 2013 they succeeded in raising £25,000 (~$34,500). This money was then spent on promoting literacy and women’s empowerment, supporting the two rehabilitation centers in Mysore, India and ultimately reuniting young trafficking victims with their families once they have the tools to be face mainstream society as confident individuals.

Through the efforts of Odanadi, 138 traffickers have been arrested, 200,000 school children have been educated about sexual exploitation, 630 missing children have been reunited with their families, and over 2,000 women and minors have successfully gone through their rehabilitation program.

Other methods of psycho-social therapies practiced by Odanadi beneficiaries include karate, art, drama and traditional dance – all in addition to individual counseling. Education is greatly stressed through the program, and enrollment in local schools, colleges and universities is encouraged.