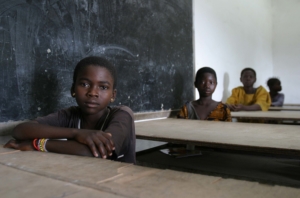 During his visit to the University of Cape Town last month, President Obama said there was no question that Africa’s economy was on the move—but it is just not moving quickly enough for children still living in poverty. With more than 60% of Africans under the age of 35, Obama emphasized the importance of the decisions Africa’s youth face that will determine the fate of their country and continent.

In his welcome address to President Obama, the University of Cape Town Vice-chancellor, Dr. Max Price, stated that African universities are lacking the expertise and resources to build advanced research universities that could contribute to improving economies. Over the past 15 years, education in Africa has made tremendous progress in expanding access to higher education, however, student numbers have increased three times more than funding often resulting in a lower quality education due to lack of resources.

Price called on institutions to consider research as a priority in developing low or middle-income countries. He said that Africa should view itself as a potential contributor to global knowledge with the capacity to develop local, relevant solutions. Unless Africans wish to remain, consumers of others’ knowledge and innovation, they should not avoid advancing their research capacity. “That capacity resides first and foremost in research universities,” stated Price.

In the Times Higher Education top 400 global universities—which focuses heavily on research as the basis for ranking—only four are located in Africa, and all four are in South Africa. Research universities in developing countries could play a critical role in educating the next generation of academics whose contributions could ultimately impact the entire continent. Like the partnership that forms the basis of Obama’s commitment to economic development in Africa, Price added that a possible key contribution of additional international partnerships could be to build research universities across the continent.

The University of Cape Town enrolls 30% of its graduate students from outside South Africa. The university hopes to advance research capacity throughout the continent with its education of Africa’s future academic leaders.