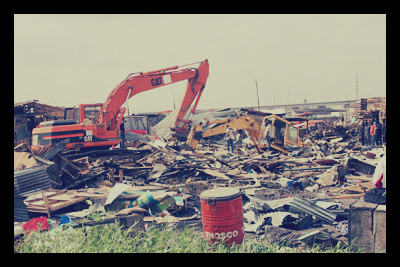 Nigerian top officials have pledged to make Nigeria the region’s – or more ambitiously, Africa’s – leading business center. The progress that Nigeria has made in recent years is hard to miss and it is harming the poor. Last week, former President Bill Clinton traveled to Nigeria to help unveil the Eko Atlantic City, reclaimed land that, a recent New York Times article says, has been built up into a “Dubai-style shopping and housing development built out into the Atlantic Ocean.” Nigeria reclaiming this land means big things for its economy and will provide a lot of job opportunities for local community members. Clinton even praised the Eko Atlantic City project for being a destination hotspot for global investment.

However, there is an ugly side to Nigeria’s progress that is going unnoticed as this push for progress in Nigeria is actually displacing and harming the poor. In Lagos, the government’s vision for progress plowed over hundreds of wooden dwellings in the slum of Badia East, leveling it in 6 hours. This left thousands of Nigeria’s poorest residents without homes and without hope. The land on which people’s homes sat were seen as areas of prime real estate or areas where improvement and money could be made. In the future, new homes will be built on the land. Yet, the chances of the displaced being able to afford these homes are basically nonexistent, according to the Lagos State Commissioner for Housing.

Within 6 hours, thousands were displaced, many saying “they were [only] given 20 minutes, at most, to pack up their belongings” and leave, according to the New York Times article. In the wake of uplifting global development, it is important to remember that, despite progress, there will always be those who live on the fringes of society whose livelihoods must be taken into account when designing the frameworks of the future.