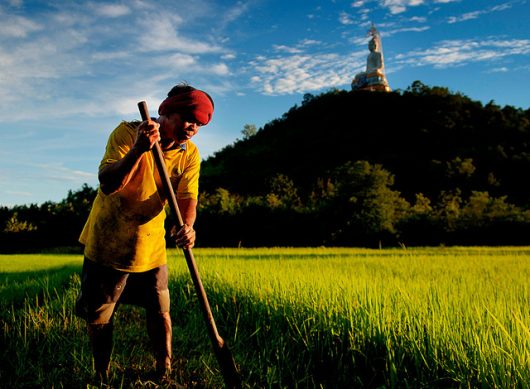 Although it might seem logical to believe that world hunger can be solved by increased food production, top research shows that lack of food is not the major factor contributing to world hunger. In its new report “Farming for the Future: Organic and Agroecological Solutions to Feed the World,” Friends of the Earth reports that world hunger is primarily influenced by the economic and social factors that prevent people from accessing food.

The global network Friends of the Earth advocates for a healthier world by focusing on the economic factors that contribute to environmental degradation. Its report presents four decades of research about sustainable farming techniques that preserve natural resources. The report claims this form of agriculture, called agroecological farming, is the best way to combat the environmental problems that threaten global food security.

Here are the report’s three myths about farming and how argoecological methods can provide world hunger relief.

Many crops are used for feeding livestock and for biofuels, which limits space for crops that go to feeding the impoverished. Because of this, the report suggests that better farming techniques, reductions in global food waste and consumers shifting to plant-based foods will provide world hunger relief.

Also, smallholders make up about 90 percent of farmers worldwide and produce about 80 percent of food for developing countries. Even so, they are often impoverished due to increasing corporate control and low crop prices. The report calls for public investments in these farmers and better policies to pull them out of poverty.

The report cites a UC Berkeley study which found that depending on the crop and technique, organic farming systems can produce as much or more crops than conventional techniques, increase profits for farmers, and reduce water toxicity due to the use of less synthetic chemicals. Organic methods also provide low-income farmers with more accessible farming techniques and more job opportunities in their communities.

When calculating efficiency based upon health, social, and environmental devastation, industrial methods are not more efficient than organic methods.

“Rather than feeding the world sustainably into the future, the industrial food system is cutting off the branch we’re sitting on by degrading the ecosystem functions we rely on to produce food,” the report states. Although the calorie and economic efficiency of industrial methods might be higher, conventional farming methods destroy the environment and threaten food security for the future.

Since agroecological farming methods cut down on environmental damage costs and improve incomes for farmers, the report presses for policy makers to invest in low-income farmers who use organic methods. It also warns that large-scale trade deals can indebt farmers through input-intensive farming.

Hopefully global policy makers and leaders will consider some of the arguments that Friends of the Earth lays out in its new report in order to help solve world hunger in more environmentally responsible ways.

Feeding the World: Sustainability Through TechnologyRates of Rural Poverty in Zimbabwe Astonishingly High
Scroll to top