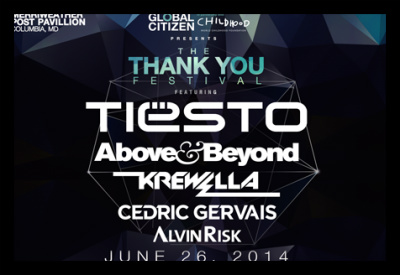 Renowned electronic dance music (EDM) artists performed at the “Thank You Festival,” which was meant to be both a celebration of past successes in the poverty reduction field as well as an opportunity to get young people excited about the cause. It was organized by Global Citizen, an offshoot of the Global Poverty Project.

The number of people living below the international poverty line and the number of global child deaths have dropped significantly in the past decade. “The American public, charities and governments have played a vital role in helping to make this happen. In recognition of the American public’s efforts, and to call for further action on behalf of the world’s children, Global Citizen and World Childhood Foundation held the Thank You Festival,” said Evans.

The festival organizers wanted the event to be stimulating, but didn’t want to lose track of the bigger picture. To help accomplish this, a massive, 15-foot-tall inflatable toilet was installed near the center of the event as a symbol of the dire state of global sanitation, which made it hard for festival-goers to forget what the music was celebrating.

Why target the music festival crowd as potential supporters of poverty reduction? “If you look at who listens to EDM, it’s young people,” said Evans. “If you want to be speaking to millennials, you’ve got to be speaking to [the artists] millennials are listening to… I think that the people behind the music care deeply about these issues, and the question is: How do you create the right platform for them to express that?”

One of his methods to achieve this involved changing how people could access tickets. Tickets to the event could only be earned by performing certain tasks online through Global Citizen. For example, potential festival-goers could write a letter to Congress, volunteer or sign a poverty-related petition to gain points that would make them more likely to receive tickets.

Even if some portion of the target audience is performing these activities just as a means to get tickets, they are still becoming more informed citizens and are learning first-hand how to make a difference in the world.

The Thank You Festival celebrated the contributions that the United States has made thus far in the fight against global poverty and the efforts that have been made in improving the lives of children across the globe. “Our foreign aid and our charitable contributions,” Evans said, “are saving and transforming lives, enabling parents and children in the poorest communities in the world to achieve their dreams.”

There is, however, much progress to be made. The end of global poverty will only be possible with support and dedication from the rising generation of youth — a goal that Hugh Evans and Global Citizen are one step closer to achieving through their work melding EDM festivals with poverty reduction projects.