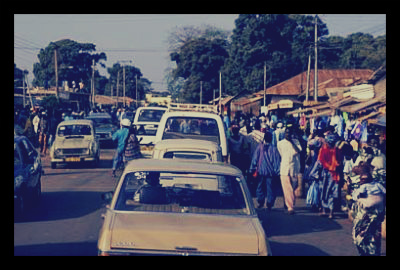 The African middle class is growing rapidly and has been since 1980.  Indeed, seven of the ten fastest growing national economies are housed on the African continent, and as the population continues to expand, so does the opportunity for further growth.  Deloitte predicts the size of the continental middle class to triple, with well over a billion residents, by 2060.  What does it mean to be a middle class African though?  Is it safe to count those lumped into this category as bona fide consumers on par with those in Western middle class brackets, or does it mean something else?  Can a continent like Africa fit with traditional Western notions of class?

Deloitte defines the African middle class as those living in urban areas not gaining income from farming but, instead, through entrepreneurship or a salaried career.  The main thing driving the middle class boom now is consumership, something Africa’s young population promises to increase in the future.  A move to cities from the farmlands and access to mobile phone technology is also spurring a larger middle class.

“A landmark, groundbreaking Deloitte study found that a 10% increase in mobile phone penetration is linked to an increase in a middle/low income country GDP of 1.2% due to the ensuing economic activity that people engage in as a result of being ‘plugged in’ and connected.”

The numbers of African’s deemed as middle class now rivals those in both India and China.  Companies are banking on the notion that the sheer numbers of new consumers who have a little more money in their pockets will drive business.  Migration to urban areas, coupled with better but still fragile sociopolitical stability, is spurring growth.  A Wall Street Journal report tells the story of, “Jossam Mass, a 32-year-old dressmaker from Malawi, moved to South Africa five years ago. Now his shop in Johannesburg’s Oriental Plaza is benefiting directly from the new consumer class.”

A report from The Guardian, citing the Africa Bank of Development, defines middle class status, “…as those spending between $2 and $20 per day…about 60% of those only spend between $2 and $4 per day and remain in what the bank calls a ‘floating class’, a vulnerable position ‘barely out of the poor category’ with ‘the constant possibility of dropping back…’”  So the funds being spent are little enough to cause doubt in labeling the situation middle class, but large enough over what many of the poorest on the continent spend.  Scholars have hinted that to term the increased spending as a solidified middle class is an arbitrary move, perhaps aimed at garnering outside international investment.  Indeed, African’s are doing better on the whole, but it may be too early to label a definite middle class movement.  It is important to consider also that international migration within Africa spurs income generation; in short, people go where the work is and it’s relatively easy to do so.  An individual nation then will have it’s middle class numbers skewed in light of migration.  The most consistently middle class nations in Africa are either far north or far south, however income distribution in those and other economically surging nations is very stagnant.

David Cowan, an economist for Citigroup Africa, posits that only two classes consisting of the ultra rich and poverty stricken comprise the continental population.  Contrary to Deloitte’s and others statements, Global Pacific advisory group places the number of true middle class Africans at only 50 million.  The Organisation for Economic Co-operation and Development (OECD) has that number at only 32 million.  What most everyone can agree on though is that incomes on the whole are on the rise.

The World Bank takes note of the increased middle class projections and says that it’s great for more business, the spread of democracy and political stability, and better infrastructure.  By the same token, the middle class will only grow, drawing numbers from the aforementioned floating class, if infrastructure demands are met.  An electrified Africa requires about $20 billion annually by 2019, along with $16 billion for water and at least $17 billion for sanitation.  To realize this, favorable policies focused, “…on human capital development and job generation…” must be put in place.

Clearly, there is no solid consensus on what a middle class Africa looks like and expectations for such run the gamut of very rosy economic outlook to what realities are today.  This supports contentions that middle class assessments on the continent are largely arbitrary in nature.  Whatever the slant may be, what can’t be denied are growing incomes and favorable economic activity happening continent-wide.  Better infrastructure and international investment will only contribute to those, perhaps making Deloitte’s 2060 middle-class projection a solid possibility.  There is no doubt that Africa is a continent all it’s own, possessing wholly different sociopolitical notions that will influence the movement of money and people.  International interest and captivation in all things Africa, like the incomes of so many there, is also on the rise.