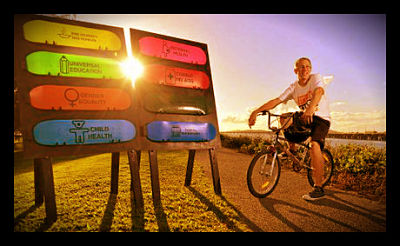 In order to address the issue of global poverty, Michael Trafford will be biking and skateboarding nearly 300 miles across Australia in July, making stops at local schools and community centers along the way.

Named Sk8 to the Finish, this 475 km campaign is intended to disseminate information in communities throughout Australia regarding global poverty and Australia’s responsibility toward developing nations.

Sk8 to the Finish aims to reduce poverty in three ways:

While this specific campaign is oriented toward the Australian government, the goal of Sk8 to the Finish can be applied to the entire developed world. More and more people throughout first world nations are realizing the benefits of contributing to developing nations. These benefits include an increase in the global economy and a heightened level of global peace. Sk8 to the Finish not only works toward these goals but also promotes a level of personal accountability for governmental progress toward these goals.

Through Sk8 to the Finish, Michael Trafford demonstrates an extreme level of personal responsibility for his government’s actions and movement toward a more developed and peaceful world.