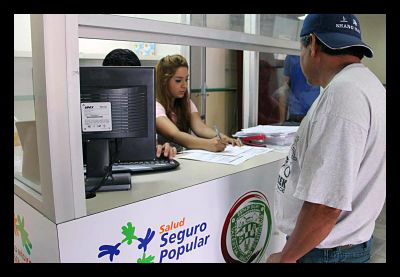 A little over a decade ago, only half of the Mexican population had health insurance, while more than half of health care expenditures were paid for out-of-pocket. Employed legal residents obtained insurance through a health care social security system known as IMSS, while those unemployed, self-employed or underemployed either paid hefty co-pays for public care or else paid in full for private health services.

In 2004, the Mexican government responded to the inefficiencies by introducing Seguro Popular, a health insurance program financed by the federal government that provides voluntary public insurance without co-pays to people not affiliated with other social security institutions.

In 2009, Seguro Popular underwent an expansion in response to the global economic downturn.  Despite some lingering inefficiencies, that expansion has allowed over 60 million previously uninsured Mexicans to obtain coverage, and has laid the groundwork for reform of the health care system overall.

Thus far, the World Bank reports that the expansion has resulted in the following gains:

Despite the reforms, there remains room for improvement. In particular, The New York Times has raised concerns about efficiency and transparency at the local level.

Within the Seguro Popular system, the federal government allocates funding to the state governments based on how many people each state enrolls. From there, the state government has wide discretion on how it spends the funds. This is a source of concern for critics, who believe that a lack of oversight and accountability at the local level leads to sub-standard health practices in some states.

Back in 2011, The New York Times quoted then-Mexican health minister José Ángel Córdova as stating, “(eight) percent of the country’s municipalities still lacked any kind of health facility.” He went on to acknowledge, “There is still first-, second- and third-class medicine.”

Moreover, concerns arise with funding. When Seguro Popular was first designed, participants were supposed to be charged a yearly fee based on income. However, due to the fact that many participants are low-income or impoverished, in practice very few participants pay.

Nevertheless, organizations like the World Bank have fronted a portion of the cost of Seguro Popular. Meanwhile, Mexico’s government in collaboration with others continue to focus on strengthening the program’s organization, functioning, and oversight of state health operations in order to better serve Mexico’s health care needs.