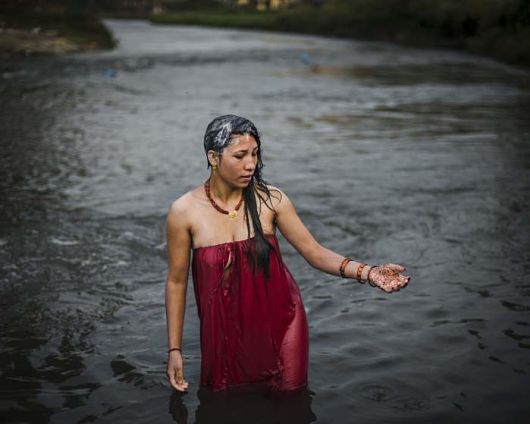 Old taboos surrounding menstruation die hard in Nepal where, until 2005, Chhaupadi, the practice of ostracizing women and girls from their own homes during their periods, did not face a national ban.

The Nepalese Supreme Court declared Chhaupadi illegal in 2005. However, the practice still retains a foothold in the country’s western region and myths surrounding women’s natural cycles remain a national problem.

According to the tradition, women and girls on their periods are also banned from sharing food or touching anyone. Rather than eating with their families, these “untouchables” must remain outside the house and keep their distance while a family member throws boiled rice to them, like they would to a dog.

The effects of Chhaupadi are extremely dehumanizing and psychologically stressful, with young girls told that they will bring bad luck on their families if they enter their own homes during menstruation. In communities where the tradition is still practiced, even women and girls who do not believe they are truly toxic fear disobeying the rules of Chhaupadi and incurring the anger of family or village elders.

In addition to being emotionally degrading, Chhaupadi also places women and girls at risk for rape, abduction, snakebites and animal attacks, as well as malnourishment. Forced to sleep in rickety huts without adequate insulation or ventilation, women and girls face illness exacerbated by the cold and unhygienic conditions or asphyxiation from improperly ventilated heat sources.

Even in regions where Chhaupadi is not practiced, taboos surrounding menstruation still affect Nepalese women and girls. The Nepali Times reports that today many households in Kathmandu still prohibit menstruating women from entering kitchens or temples, eating with the family and sleeping on their beds.

These practices condition women to view their bodies as unclean and to devalue themselves because they take the blame for any misfortune their families may experience. Chhaupadi’s legacy contributes to a wider disregard of women and girls that places them in danger.

A prime example comes in the wake of the recent earthquake that devastated Nepal. Although the refugees require many resources that aid organizations are working to meet, menstrual hygiene is far from the minds of most.

Female refugees have few sanitary resources. Some reuse the same menstrual products for days, washing them in unfiltered water sources in the same areas where refugees openly defecate.

“There are no proper toilet facilities or private spaces in the camps,” reported Dr. Hema Pradhan, consultant gynecologist and fistula surgeon at the Kathmandu Model Hospital. She called the sanitary practices in these camps “worrisome.”

Ursula Singh, a program officer for women’s rights NGO Loom Nepal, stated, “We went to the village of Kavre on the outskirts and saw some girls sitting huddled in tents, covered in blood.” Most girls, she elaborated, wait until dark to step outside and dispose of or attempt to sanitize menstrual products.

“We want them to at least practice hygienic disposal because they are in super exposed conditions and that puts them at a higher risk to contract diseases,” Singh said. However, the only hygienic means of disposing of sanitary napkins is often digging holes and burying them in the ground.

In a culture with superstitions such as the belief that any plant a menstruating woman touches will die, disposing of menstrual products and trying to manage period blood and symptoms in an area with as little shelter or privacy as a refugee camp must be a traumatic experience. Lingering stigmas place women under intense scrutiny and many would rather risk disease, injury or abuse than suffer negative social responses to their behavior while menstruating.