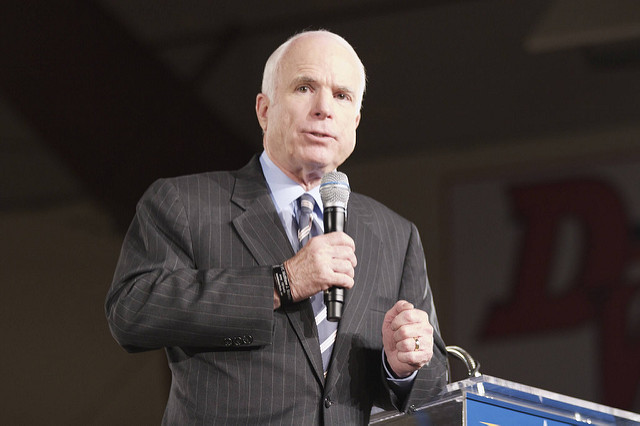 The United States government has been invested in Cambodian development since the Paris Peace Accords in 1991, when an internationally supported plan to transition Cambodia towards democracy was set into motion. The United States has since provided hundreds of millions of dollars in assistance to Cambodia, aiding health, development and non-governmental organizations. Despite these efforts, Cambodia remains an undemocratic society, dominated by one party whose failure to hold free and fair elections is currently threatening the health and well-being of the people of Cambodia. Senator John McCain recently introduced a resolution to Congress which would reaffirm the commitment of the United States to promote democracy and the rule of law in Cambodia, asserting his dedication to protecting Cambodians’ human rights.

Cambodia’s progress towards democracy has resulted in steady economic growth as well as significant improvements in public health. However, there are still almost three million Cambodians living in poverty. Maternal and child mortality rates are high, access to safe water and sanitation is limited and there is a growing epidemic of noncommunicable and communicable diseases. Healthcare is not readily available to the poor, who cannot afford the burden of high out of pocket costs, which make up the majority of Cambodia’s national health expenditures. Without proper leadership in public health programs and adequate access to healthcare, Cambodia’s health crisis will continue.

Unfortunately, Cambodian progress has been derailed during the past few years and Cambodians’ human rights are becoming increasingly threatened. The Cambodian government has begun seizing even tighter control, pushing out public programs that would help protect citizens’ well being, restricting the media, and assassinating or arresting individuals who seek to undermine their oppressive authority. Among those arrested in just the past two years include a women’s rights activist, senior members of the Cambodian Human Rights and Development Association, the president of the Cambodian National Rescue Party and a political commentator. In just the past few months, the Cambodian government has forced out members of the Peace Corps, ordered the closure of the National Democratic Institute and held a threatening election in violation of campaign rules after demanding that election monitoring organizations cease their activities.

The resolution McCain seeks to pass would condemn the political violence and impropriety currently threatening Cambodians’ human rights. If passed, the United States government would place implicated Cambodian officials on a Specially Designated Nationals list and call on the Cambodian government to hold free elections that would allow citizens to elect leaders that would prioritize their health and well-being.

What Is the AGOA and MCA Modernization Act? Vietnamese Architect’s Plan for Low-Cost Housing for the Poor
Scroll to top