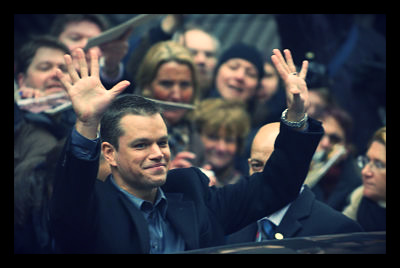 When Damon heard that the United States Congress had passed into law the Senator Paul Simon Water for the World Act, he praised the U.S. government for its commitment to ending the crisis for the world’s poor.

“In order to solve some of the biggest challenges we face, such as ending extreme poverty, we know we must address and finally end the global water crisis for billions around the world,” Damon told USA Today in an interview about the campaign.

Damon was so dedicated to supporting his cause on water that he used toilet water to participate in the ALS Ice Bucket challenge, an activity that involves dumping a bucket of ice and water on a person’s head to raise awareness for a disease.

Stella Artois has also donated a total of $1.2 million to Water.org to help the new campaign and has invited the rest of the world to join the cause by putting limited-edition Chalices up for purchase on Amazon.

Purchasing one of the three glasses, each with a different pattern modelling art specific to Ethiopia, Honduras and India, will allow the nonprofit organization to provide five years of clean water to one person in the developing world.

Both Water.org and Stella Artois encouraged people to buy the chalices in hopes that it will spread awareness about the cause.

The campaign got its name due to the fact that women across the world spend a combined total of 200 million hours each day collecting water. This impacts women’s productivity hours and increases the likelihood of them encountering dangerous situations during those long walks.

“Buy a Lady a Drink aims to help put a stop to these water-collecting journeys, so women can start new journeys of their own,” said Damon.

The global water crisis affects a majority of women because they are often the ones who provide supplies for their families. Damon and Water.org attempts to tell stories of women around the world who collect water to raise awareness.

The charity has surpassed its goal of providing two million people with safe water and sanitation, allowing women to become more productive, and keeping children safe from health issues.

The campaign will help the 3.4 million people who die each year from water, sanitation and hygiene-related causes; most of these are preventable diseases.

Allowing access to obtaining safe, clean water can significantly improve the lifestyle of those living in remote areas.

In September, the United Nations will reveal the post-2015 Sustainable Development Goals—a global agreement to pursue new goals that will allow the world to alleviate global poverty, battle inequality and build a more sustainable planet.

Addressing the global water and sanitation crisis is significant in achieving these goals.

Damon will continue to support Water.org and promote the new campaign to help the 750 million people around the world who lack access to safe water. Both the organization and beer company hope that their partnership can make a change.