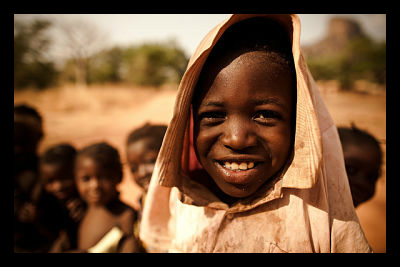 Burkina-Faso, one of the most severely impoverished nations in the sub-Saharan region of Africa, was hit hard by the Sahel food famine of 2012, which, all told, left an estimated 18.7 million people in the midst of an extreme food crisis.

This land-locked African nation gets barely 31 inches of rainfall a year, and without access to the ocean as a source of critical marine protein, the vast majority of Burkinabés practice subsistence farming, despite the omnipresent threat of drought and crop-failure.

Inadequate rainfall and other climatic shifts continue to plague the country’s efforts in food security, increasing the rate of desertification and further threatening the well-being of its citizens and the viability of its economy.

Today, nearly half of Burkina-Faso’s citizens live in extreme poverty, getting by on less than $1.25 USD per day. Lack of access to adequate nutrition and clean drinking water is just one reason that a baby born in Burkina-Faso, having survived the 8 percent chance of dying as an infant, can expect to live only to be around 58-years-old, an entire 2 decades below the global average.

The World Food Programme additionally reports that one-in-three babies born in Burkina-Faso suffer from growth retardation due to undernourishment, while half of the nation’s mothers are anemic.

As is the case with many impoverished nations that lack access to adequate family planning and health services, Burkina-Faso’s population is growing rapidly, with the World Health Organization estimating its expansion at 3 percent annually.

As the cycle of poverty is perpetuated by population growth and the near non-existence of formal education- the WHO says only 3.2 percent of men and just 1 percent of women have completed any secondary education–and has contributed to Burkina-Faso’s being ranked number 65 out of 78 countries on the global hunger index, which tracks undernourishment, infant mortality, and infant health at birth.

In 2012, in the thick of the Sahel drought that sent the Sub-Saharan region into a period of heightened malnutrition, one Burkinabé farmer Hamadouin Tamboura told Al Jazeera, “We work hard but gain little. We don’t have what we need, it’s not easy at all. The soil is poor and so are we. We don’t know what to do, but still we try anyway.”

“Our animals are also suffering,” said Tamboura, “We haven’t got enough to eat, so of course they haven’t either. Animals cost lot of money to feed. There’s not enough water, no pasture, even the grass is finished. The animals are eating paper and plastic, which upsets their insides.”

Just two years later, however, Reuters reported the country’s subsistence farmers had developed new techniques to reclaim 10 percent Burkina-Faso’s previously “unproductive lands”. Techniques such as collecting water in reservoir ditches in anticipation of sporadic rainfall has allowed the country’s agricultural sector–which accounts for 35 percent of their GDP–to remain viable in the face of climate change, to which Amanda Lenhardt, research officer at the UK-based Overseas Development Institute, told Reuters Burkina-Faso is “one of the world’s most fragile areas”.

USAID has partnered with Tuskegee University in Alabama and the International Institute of Water & Environmental Engineering to help provide rural residents in Burkina-Faso with better access to safe drinking water, improved sanitation techniques, as well as the agricultural techniques farmers need to withstand the rapidly changing climatic conditions.

Malnutrition in Malaysia Poverty in Kuala Lumpur
Scroll to top