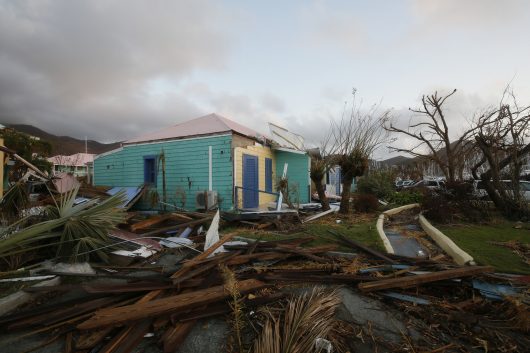 After two category five hurricanes ripped through the Caribbean in the space of two weeks, the small nation of Dominica is forced to reassess how it will deal with future storms and become climate-resilient.

Hurricane Maria hit Dominica on September 18, 2017 in the middle of the night. It flattened approximately 22,000 homes, killed 26 people (with 31 still missing) and nearly wiped out plant life on the island. Dominica is a small island east of Puerto Rico with a population of roughly 74,000.  As of October 18, 2017, no one on the island had access to running, drinkable water. With sewage systems destroyed, locals were left with fears of diarrhea and dysentery.

It is difficult to account for people taking shelter with other families, but according to the Government of Dominica, out of 146 centers, 108 are housing 2,911 people. It is difficult to find homes in Dominica with a roof still attached.

More than 45 percent of Dominica consists of rainforests and protected national parks. These have been decimated by the storms. Some greenery has returned in the past two months, but it is still a huge blow to Dominica’s livelihood.

Agriculture and tourism, two main factors contributing to Dominica’s GDP, were upended in the wake of Hurricane Maria. Dominica is still several months away from being able to welcome new tourists. With the massive impact on income, citizens have increasingly left the island in search of opportunities in neighboring countries.

Warmer seas make stronger storms, and Dominica’s Prime Minister Roosevelt Skerrit believes that in order for his country to continue on, it will need to rebuild as the world’s first climate-resilient nation.

“To deny climate change… is to deny a truth we have just lived,” Skerrit told the United Nations five days after Maria. “No generation has seen more than one Category 5 hurricane. We’ve seen two in two weeks.”

Skerrit is pushing to rebuild Dominica in a manner that would greatly reduce the impact of hurricanes, with enclosed spaces for livestock and climate-controlled centers for agriculture. Skerrit emphasized the importance of moving toward renewable energy like geothermal and solar, as well as researching and adopting construction codes utilized in the state of Florida.

Skerrit is confident that Dominica will achieve its goal of becoming climate-resilient, but this must be done with international cooperation.

“We are among those countries which contribute least to climate change,” Skerrit said, “but over the last two weeks we have suffered the consequences of two devastating storms which have left us struggling to stay on the path of sustainable development.”

The Water Quality in Saudi Arabia: Resisting Water Salinization What the Solar Energy Market Growth Means for the World’s Poor
Scroll to top