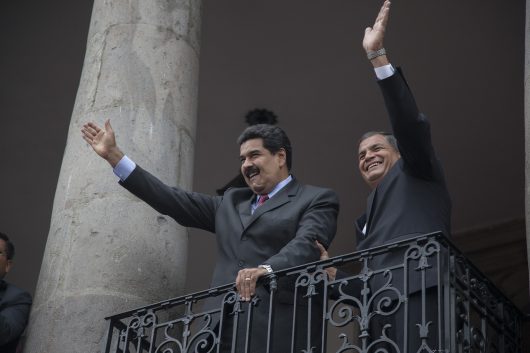 Venezuelan President Nicolas Maduro currently faces a referendum for his removal from office. Last Thursday, 15 nations from the Organization of American States (OAS) called for procedures to begin after an earlier meeting where they discussed Venezuela’s possible suspension from the OAS. The question is now, will Maduro’s removal actually benefit the poor in Venezuela?

In May, President Maduro declared a 60-day state of emergency in response to growing food and medicine shortages. A monthly food basket in his country now costs 14 times more than the average monthly income at minimum wage.

Maduro’s predicament is partly inherited from his predecessor, Hugo Chavez. Until his death in 2013, Chavez had used oil revenues to fund large-scale social programs in healthcare, housing, food and education.

However, by doing so Chavez sacrificed the economic diversity that might have helped sustain the country’s fight against poverty.

The price controls Chavez implemented to protect the poor from high food and healthcare costs are now returning to haunt the country. With smaller margins for profit, industries have cut back on production, leading to a shortage of goods and an ever-higher dependency on imports.

For example, the Venezuelan Pharmaceutical Federation announced in April that it suffers an 80% deficit in basic medicines. The IMF has also forecasted a 720% increase in general prices this year, with another 2,200% spike expected in 2017.

All of this makes the Venezuelan people hungry — and not just for political change. A study by Simon Bolivar University in Caracas has shown that up to 87% of the population cannot afford the food it needs. This is no surprise, when a staggering 72% of monthly wages are spent on food alone.

Also, violence is on the rise. Venezuela’s murder rate has risen from 25 per 100,000 in 2009 to 45.1 in 2011 — higher than Columbia and Mexico. Though there is no significant presence of drug cartels, leftist political violence is targeting citizens with opposition views.

The violence occurs regardless of social class. One professor assaulted on a Caracas bus commented that, “it wasn’t rich people riding on the bus — it was poor people trying to get home from work.”

How the US Can Help

Nevertheless, the U.S. is still Venezuela’s largest trading partner. Among its imports are refined crude oil, ethers, soybeans, and an array of machinery and technology. A total of $10.1 billion in imports was recorded in 2014.

Venezuela is, therefore, a country to watch for humanitarian aid. In June, Secretary of State John Kerry announced a dialog to ease tensions with Maduro’s opposition, including a vote against the suspension proposed by OAS.

Humanitarian aid may be one way the U.S. can help end the crisis in Venezuela while promoting democratic governance. But only time will tell if Maduro’s removal will favor the poor in Venezuela.

Innovative Housing Solution Will Reduce Poverty in ColombiaSesame Street: Improving Global Health One Muppet at a Time
Scroll to top