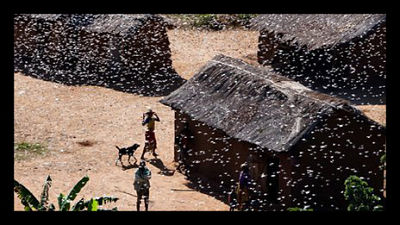 Locust swarms in Madagascar are destroying rice fields and causing hunger in areas of the country. Even so, the locals are attempting to make the best out of a bad situation by catching as many of the insects as they can to supplement their diet. There are reports of locals catching locusts with mosquito nets, while in the Sakaraha area children are assisting with a most unusual form of harvesting—catching the locusts with their hands and drowning them in buckets of water. The insects are then sun-dried and roasted on sticks or fried. According to the villagers who have consumed the insects, they taste salty.

The UN Food and Agriculture Organization (FAO) reported locusts are rich in protein and present no health risks, as long as they are not treated with pesticides. During periods of increased locusts activity, large amounts of the dead insects can be found readily available in the market places of many affected areas.

In an affected region, a subsistence farmer, who feeds a household of 10 from the three annual harvests she receives from her two fields (one for the rice, the other for vegetables), told IRIN about the damage the locusts had caused. “Normally we can live from the food we grow, but this is the hardest year we have ever had. The locusts ate all the rice, everything,” she said. “It’s not life right now, we are just surviving.” Despite locusts still in the area, she recently planted more rice, risking the chance that the insects would not return.

Locusts are a far from suitable substitute for rice, the farmer stated. The insects can only be stored for about a week as opposed to rice, which can be stored for extended periods of time.

Hasibelo Rakotovao, the National Locust Agency’s (CNA) Sakaraha agent, informed IRIN that the last time the government took preventative measures against locusts in the area was June 2011. Other CNA agents reported their work was made nearly impossible by the restructuring of the under-funded Agriculture Ministry. They received only a tenth of the necessary amount of pesticide needed to cover the area.

Locusts in the region began swarming in April 2013. Since then, the area has witnessed 2 to 3 swarms a week. “These swarms are now in their fifth generation (having reproduced five times). The situation will get even worse if nothing is done by October and another generation starts up again,” Rakotovao told IRIN. Current national and international efforts to rid the country of the insects continue to fall short due to the lack of government funding.