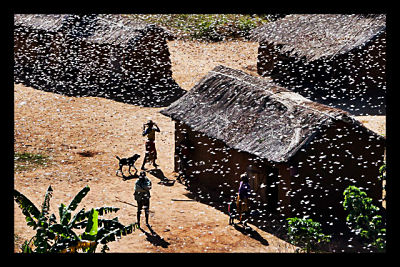 Madagascar has been facing a locust plague the past couple of years, and the problem is only getting worse. The Food and Agriculture Organization for the UN (FAO) has begun a campaign for $22 million to combat this plague. The FAO estimates that by September, locusts will infest more than two-thirds of the country. This plague has serious implications for food security and nutrition in Madagascar. Nearly 13 million people’s food security will be impacted by this plague, and nine million of those people are directly dependent on agriculture for food and income.

“If we don’t act now, the plague could last years and cost hundreds of millions of dollars. This could very well be a last window of opportunity to avert extended crisis,” said Jose Graziano da Silva, Director-General of FAO.

To have any hope of saving the crops of 2013 there will need to be preventative measures taken, starting as early as July. FAO argues that the funding must be given by July as well as not cut to a smaller amount or there will be no hope for Madagascar. In 2003-2005 when the Sahel region experienced a locust plague it cost almost $570 million to repair the damages. Furthermore it only costs $3.3 million a year to take preventative measures against locust.

The FAO will lead aerial control operations with the money funded. These operations will identify and eliminate locust populations. If these populations of locust are not identified and destroyed they will continue to breed and produce more swarms. This could lead to several years of prolonged locust plagues. In Madagascar crops that have been affected are averaging a loss of 40 to 70 percent of their crops, with reports of 100 percent loss of land. The locusts have already caused the loss of a quarter of Madagascar’s rice production this year. This will severely affect food security because rice is the main staple of food in Madagascar. The FAO must receive full funding on this project if there is any hope of saving Madagascar from a debilitating locust plague.