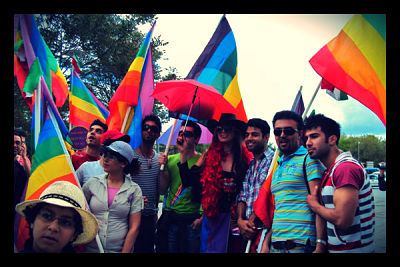 Originally from Cameroon, Carine and Gertrude were granted asylum in the U.S along with their baby daughter, Eldine, to avoid legal persecution and people who would have had them killed because they are gay.

Gertrude had been cast as one of the characters in a documentary about being part of the hidden LGBT community in Cameroon. She soon began receiving death threats. She had been in Los Angeles, California at the time, but her girlfriend Carine was still in Cameroon with the baby.  Carine was forced to go into hiding with Eldine until making it to San Francisco in November, reports the San Francisco Gate.

Despite the fact that Carine and Gertude have both been granted asylum, they are waiting for Eldine to gain asylum as well.

Unlike in Cameroon, Carine and Gertrude are able to be affectionate and hold hands in the United States without fear of being beaten. They can also push their baby in a stroller and not be referred to as “witches” or “demons of sin.”

Specifically, in Cameroon, as well as other African countries like Uganda, being “convicted” of homosexuality can bring years of imprisonment. They have been lucky to get away from Cameroon, but their freedom is not yet sealed due to the status of their 1-year-old daughter. The San Francisco Gate states that, “If she doesn’t gain asylum status from immigration officials, she could be forced to go back to their homeland, where her future would be murky at best and tragic at worst.”

Carine boldly stated that, “I believe in God, I know we are not demons for our homosexuality, and I know we are lucky.” Just years ago, Gertrude was raped and trampled into a coma by a group of men that had guessed she was gay. In the United States, the risk of this transpiring again has been reduced significantly–especially in California.

The lawyer dealing with their case is Diane Kruze of Morrison and Foerster in San Francisco. She is handling their asylum case pro bono because they have no savings or income, fleeing with only the clothing they wore. She mentions that, “You can be arrested in Cameroon, and in so many countries like it, just on suspicion of being gay. Their choice really is: stay here and live, or go home and face death.”

The Huffington Post reports that “The flow of refugees will increase. Capacity building is needed.”

Even in gay-friendly cities across the country, change needs to be demanded to further assist refugees that need help.

Rising Need for Social Justice in Guatemala Syrian Refugee Resettlement in the U.S.
Scroll to top