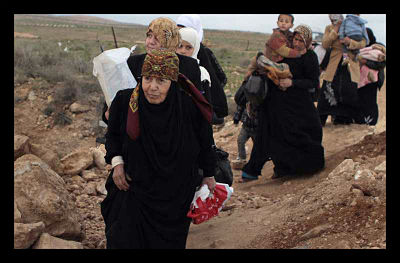 Since the start of the Syrian conflict in 2011, over 1.7 million people have fled Syria seeking refuge in the surrounding countries. Lebanon has received the largest number of refugees in the region. The United Nations Humanitarian Chief recently visited Lebanon and is now calling for increased support to help the country handle the burden of caring for these refugees.

“Since my last visit to Lebanon just six months ago, the number of refugees has increased by more than 200 percent,” Under-Secretary General for Humanitarian Affairs Valerie Amos said in Beirut, at the end of her visit. “By the end of the year, refugees could make up 20 per cent of Lebanon’s population.”

To support over half a million Syrian refugees, Lebanon will need more humanitarian aid than ever before. Last month, the U.N. launched a $3 billion appeal to provide life-saving aid and protection to Syrian refugees. Of this $3 billion, Lebanon was allocated $1.7 billion. However, humanitarian organizations and the Lebanese government have only received 15% of the funding needed so far, according to the Office for the Coordination of Humanitarian Affairs.

“The Government and people of Lebanon have opened their borders and doors to their Syrian neighbors in time of need,” said Ms. Amos,“And the crisis is taking a toll on the economy and on the provision of basic services, such as health and education, in the country.”

On her visit, Ms. Amos visited the Bekaa region of Lebanon, which is home to 180,000 refugees. After her visit to the settlements Ms. Amos commented, “Over 50% of the Syrian refugees here are children. It is Syria’s future that is being blighted. We need to do all we can to support the Lebanese Government…if you have thousands of refugees crossing the border every day, it’s a huge burden not just on the country but also on the people who are hosting the refugees.”