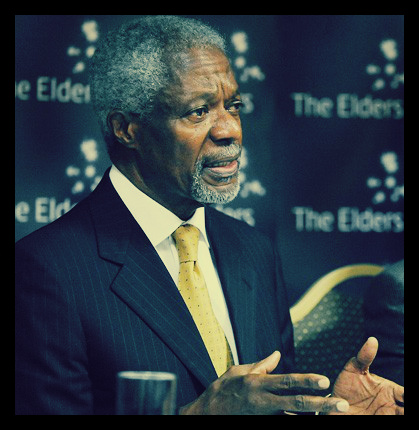 Kofi Annan was the seventh Secretary-General of the United Nations preceding the current Secretary-General, Ban Ki-moon. In a recent town hall-style discussion at Yale University, reports Jim Shelton of the New Haven Register, the former U.N. official reflected on his tenure, during which he received a Nobel Peace Prize in 2001 for his work in advocating on the issue of HIV/AIDS and other global issues. Annan also expressed his support for reforming the U.N.

He stressed that reform was necessary both in expanding the membership of the U.N Security Council, which has five permanent and ten non-permanent members, and addressing the issue of global poverty, which is one of the Millennium Development Goals due to be re-examined in 2015.

Annan’s most recent and well-known diplomacy role has been as the U.N.’s envoy to the Arab League during the beginning of the Syrian crisis in 2012. Annan’s frustration with the inaction of the U.N. in addressing the issue famously led him not to renew his contract for the position of envoy in August 2012.

Annan said the U.S. and Russia must lead the way in shaping international consensus on a solution in Syria. Otherwise, a “chaotic collapse” there may lead to ethnic cleansing and ever greater global tension,” writes Shelton.

Kofi Annan’s urging towards effective diplomatic action is a rallying cry for nations to help assuage the mounting violence in Syria. With all the respect garnered through his long history of international diplomacy, we can only hope that Annan’s colleagues in the U.N. heed his advice.

The Anonymous Extraordinaries What is Crowdfunding?
Scroll to top