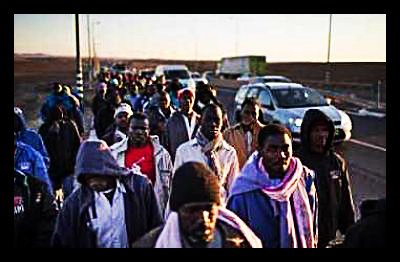 A group of 20,000 people gathered in Rabin Square in Tel Aviv, Israel on January 5 to protest Israeli migrant laws. Most, if not all, of the protesters are African refugees attempting to draw attention to their desire for asylum and end the laws that could put them in detention or erase their right to work.

Al Jazeera reports that this is the largest such rally by migrants in Israel’s history. The rally transpired after a mass walk-out from a detention facility in December by hundreds of asylum seekers from Africa. These people had been detained there for a night and the following day were banned from work.

The Voice of America News states that, “Israel’s parliament passed a new law last month allowing authorities to indefinitely detain migrants who lack valid documents and ban them from jobs.” Most of the African protesters have come from Eritrea and Sudan and are seeking asylum because of poverty, violence and political chaos.

Haaretz quotes one of the protesters explaining that, “We didn’t come here to stay our whole lives; we want to return to our home countries once the situation improves.” Eli Yishai, former Interior Minister of Israel advised that the Jewish people should be sympathetic to the suffering of others as long as it would not put the state in danger. This is because he firmly believes that the African refugees want to change Israel, despite their claims against his belief.

Due to the sheer volume of people entering the country, Israel spent $377 million dollars on a border fence to stem the flow of immigrants in 2013, reports Al Jazeera. This fence evidently did its job because though 10,000 people crossed the border in 2012, only 36 were able to enter in 2013.

Legislation was passed on December 10 allowing authorities to detain illegal immigrants entering the country for up to a year without trial. This did not go over well with the Association for Civil Rights in Israel (ACRI) as they, as well as other groups have already filed petitions against the new law. Despite all of the issues, the new bill had passed by 30 votes in favor and only 15 against out of the 120-member Knesset.

A Congress of Millionaires The Pakistani Taliban
Scroll to top