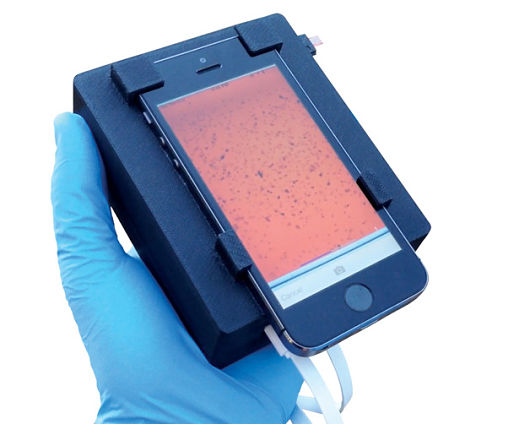 A new mobile iPhone application developed by UC Berkeley undergraduates is promising to overcome a roadblock in the treatment of river blindness in rural African communities.

River blindness is caused by the parasitic worm onchocerca volvulus, which is transmitted to humans by blackfly bites. River blindness has a high incidence rate near fast-flowing streams in tropical climates, with 99% of cases occurring in Africa, and 1% in Latin America and Yemen, where experts speculate the fly migrated with the slave trade centuries ago. The disease is termed “river blindness” due to the effect the parasite’s larvae (microfilariae) have on their human host: if left untreated, the microfilariae migrate to the skin and eye, where human immune response is somewhat limited. The microfilariae can lacerate the cornea, over which scar tissue forms to eventually cause permanent blindness.

While somewhat correlated with geographic location, the relatively high incidence of river blindness in Sub-Saharan Africa is a result of poor health infrastructure in rural agricultural areas that cannot provide thorough prevention and treatment programs. Many blackfly bites are in fact needed to cause infection, indicating that diligent community interventions can curb parasitic transmission. By partnering with pharmaceutical giant Merck to distribute the drug Mectizan (which kills the parasite’s larvae), the Carter Center spearheaded a successful campaign to eliminate river blindness in Colombia, and is currently working in Ecuador, Brazil, Venezuela, Uganda, Sudan, Ethiopia and Nigeria.

However, treatment and prevention campaigns were suspended in some communities after ivermectin (the generic label for Mectizan) was found to harm patients who were also infected with another parasite, commonly known as Loa loa, or African eye worm. Similar to the onchocerca volvulus, Loa loa is transmitted via deerflies found in the rainforests of West and Central Africa and can also cause blindness. Ivermectin administered in patients with high Loa loa levels (exceeding 30,000 per milliliter of blood) can potentially lead to severe or fatal brain damage.

In order to quantify the prevalence of Loa loa parasites in a patient and determine their eligibility for ivermectin treatment, laboratory technicians traditionally counted them manually in blood samples—a technique not conducive to use in the field or in mass treatment campaigns, such as those led by the Carter Center. By drastically improving the efficiency and accessibility of Loa loa screening, however, the new iPhone app CellScope Loa, promises to increase the reach of river blindness treatment and prevention programs.

Born from an optics class project in 2006 by a group of undergraduate students at UC Berkeley, the mobile phone application was first developed by UC Berkeley’s Fletcher Lab in 2009. A $400,000 project to expand its global health application was later funded by the Bill & Melinda Gates Foundation, UC Berkeley Blum Center for Developing Economies, USAID, and the National Institute of Allergy and Infectious Disease (NIAID). Thomas Nutman, the head of clinical parasitology at the National Institutes of Health and a bioengineering professor at UC Berkeley, led the team of UC Berkeley engineers at the Fletcher Lab to design CellScope Loa.

CellScope Loa is breaking ground in the field of mobile imaging technology because it uniquely combines hardware and software to provide point-of-care testing. The hardware—a 3D printed plastic base, microcontrollers, gears, circuitry LED lights and a USB port—captures images of the sample, while an algorithmic software analyzes the “wiggling movements” observed to determine the prevalence of the parasite. CellScope Loa is more accurate than laboratory testing, which was more vulnerable to human error. The entire testing process also takes about three minutes: one minute to obtain a blood sample via finger prick, and two minutes for the microscope to analyze the sample using motion testing.

Their initial testing of 33 patients in Cameroon yielded zero false negatives and two false positives; Fletcher and Nutman are taking 15 devices back to Cameroon this summer to test 40,000 more patients. If successful, CellScope Loa would mark a significant stride in mobile health technology, which is shifting the approach—and increasing the impact—of public health initiatives. Although its applicability is somewhat limited to motion-sensing tests (versus tests for antibodies that diagnose other infectious diseases, such as hepatitis B), CellScope Loa can also be used to guide ivermectin treatment of lymphatic filariasis, or elephantiasis, and may have future applications in tuberculosis and malaria testing.