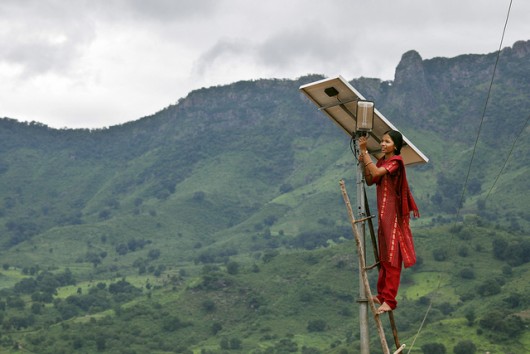 The Indian government wants to produce more than 10 percent of all energy from solar sources within the next seven years and more than 25 percent by 2030, according to Global Post. India’s solar goals are in response to the Paris agreement, which it signed last month in order to work towards reducing emissions.

India is also one of the founders of the International Solar Alliance, which consists of 120 countries committed to expanding and improving solar power technology use.

Currently, India relies on coal for 61 percent of their power consumption and one-fifth of the population lives in poverty. How does India plan to implement their solar power goals?

Prime Minister Narendra Modi raised India’s solar goals to 100,000 megawatts by 2022. This is more than 20 times current production. If India is able to meet this solar power goal, it will be one of the biggest solar powerhouses in the world, according to Global Post.

A Senior Official in the Ministry of Power said, “With about 300 clear, sunny days in a year…the solar energy available exceeds the possible energy of all fossil fuel energy reserves in India.”

According to Samarth Wadhwa, founder of Sun Bazaar, it is not just middle or upper-class India that will benefit long term from solar power, but poor and rural India will also benefit from “off-grid” solar projects. Solar power projects have found great success in remote villages.

Strengthening transmission lines and improving grid infrastructure will be crucial in implementing effective solar power units. The government is working to help and provide in any way they can. The Ministry of New and Renewable Energy offers 30 to 40 percent funding for the cost of solar lanterns, home lights and other small systems, according to Global Post.

A group of experts from Stanford University are calling India’s solar goals a global priority in a report they released on Tuesday. They call for the international community to support Prime Minister Modi’s “audacious solar ambitions” that present opportunities for India and the world, according to the Economic Times.

The Stanford report claims Modi’s solar target is feasible saying, “From a climate perspective, India’s solar ambition is the bright spot in an energy landscape that will likely be dominated by carbon-heavy fuels in the foreseeable future.”

The report urges global support and financing for India’s solar dreams. Varun Sivaram, one of the report’s authors said, “It is the in the world’s interest if India meets its solar targets. Development banks, agencies like USAID, World Bank, ADB, must support a diverse mix, and governments and bilateral agreements must offer India technical and policy support.”