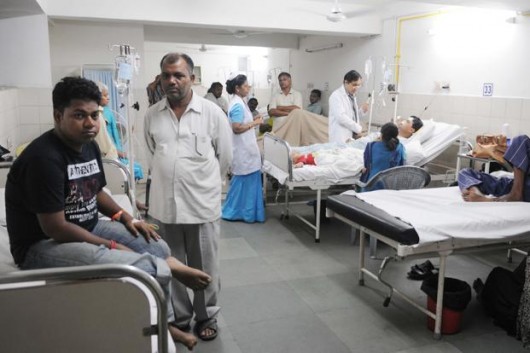 Delhi, the capital of India, is going through the largest case of dengue fever in five years. There have been more than 1,800 cases of dengue fever recorded in 2015. Nearly 200 more patients were diagnosed with dengue fever than the 1,695 patients in 2010.

Proper treatment reduces the mortality rate of dengue fever to 1 percent, however there is more than a 20 percent mortality rate for untreated dengue fever. Nearly half of the world’s population is at risk of contracting the disease.

There are nearly 25 million people residing in New Delhi and the high population has caused an overflow in hospitals. Although government hospitals are not permitted to refuse dengue patients, the influx of patients has proven to be too much for the public health system to handle.

Patients are sharing beds and queues for dengue fever screenings are out the door. The government has had to issue a temporary three-month registration to 48 new private hospitals and nursing homes to accommodate the overwhelming increase of patients.

It is in this kind of crisis that a strong public healthcare system is shown to be of value. The World Health Organization recommends that there by at least five hospital beds for every 1,000 people but Delhi has a little more than half the number of recommended beds.

With one of the lowest rates of government spending on healthcare, only roughly 1 percent of India’s Gross Domestic Product goes toward public healthcare. Private hospitals are catered to the middle and high class, leaving the public government hospitals overcrowded, understaffed and underfunded.

More than ten people have died from the dengue fever outbreak in Delhi. It is hoped that this recent outbreak will cause for serious reorder of the healthcare system.