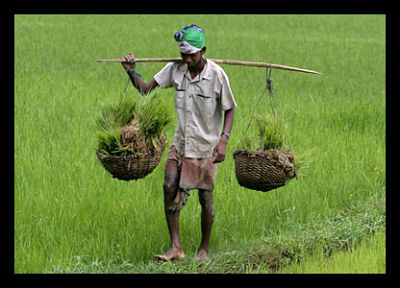 Suicide can be defined as the act of taking one’s own life voluntarily and intentionally by an individual driven to despair out of a complex web of motivations. It is estimated that more than a quarter of a million of Indian farmers have committed suicide in the last 16 years.

Even while this figure is striking, it considerably underestimates the actual number of farmer suicides taking place. Women, for instance, are often omitted from farmer suicide statistics because most do not have title to land. A great number of those affected are cash crop and cotton farmers in particular. The question is – why are these Indian farmers committing suicide on a mass scale?

Backed by leaders from the United States and other countries, farmers in India abandoned traditional farming methods in the 1960’s and 1970’s, joining the Green Revolution. The goal of the Green Revolution was to increase the efficiency of agricultural processes so that productivity of crops would increase and could help developing countries feed their growing populations.

Indian farmers started growing crops the American way, with chemicals, high-yielding seeds and irrigation. The system worked well for years and since then, India has gone from a country of soil imports to one of exports.

The Green Revolution has been credited with being one of the most successful political and technological achievements in human history. It turned India from a food-deficient country to one of the world’s leading agricultural nations, and therefore a major contributor to the world market.

Despite all this, in 2009 alone, 17,638 Indian farmers committed suicide. That’s one farmer every 30 minutes. How has the export of Green Revolution technologies led to the largest wave of recorded suicides in human history?

In 2002, the Genetic Engineering Approval Committee approved Monsanto Bollgard’s Bt cotton, which is genetically modified to produce a toxin whose job is to kill American bollworm, a common cotton pest in India. A majority of cotton farmers in India have invested in this new, genetically modified cotton in hopes their cotton crop would survive bollworm infestations, result in higher yields, decrease instances of crop failure, and overall provide greater economic security for their families.

Investing in high-yielding seeds has not led to greater financial security, but has instead contributed to the financial distress for far too many farmers. Bt cottonseeds demand even more of two resources that are already scarce for many farmers: money and water. These cottonseeds cost at least double what non-Bt seeds cost, and multinationals only allow them to be sold in waves, which prevent farmers from replanting seeds the following year.

To afford the expense, many farmers have to take out one or even multiple loans. Many small farmers resort to community moneylenders, who usually charge high interest rates. Furthermore, Bt cottonseeds require much higher amounts of water than others, and for farmers who lack access to proper irrigation and who rely on rain waters, the crop often fails.

This lack of access to water, and lower yields as a result, means that farmers are often unable to cover their costs, a problem that will be magnified as India privatizes water and irrigation pathways.

For multinational corporations, it is common knowledge that Bt cottonseeds require more water. However, this is not being effectively communicated to farmers. Boxes of Bt cotton have a warning label that instructs farmers to use the seed only in irrigated fields, however, the warning is in English. English is not commonly spoken as a first language and is not readable by a vast majority of the Indian population.

“Producing more. Conserving more. Improving farmer’s lives.” These are the promises made on Monsanto India’s website, alongside pictures of happy, prosperous farmers from the state of Maharashtra. 95 percent of India’s cotton seed is now controlled by Monsanto. Because seeds are the first link in the food chain, corporate control of seeds means corporate control of life, particularly the life of a farmer.