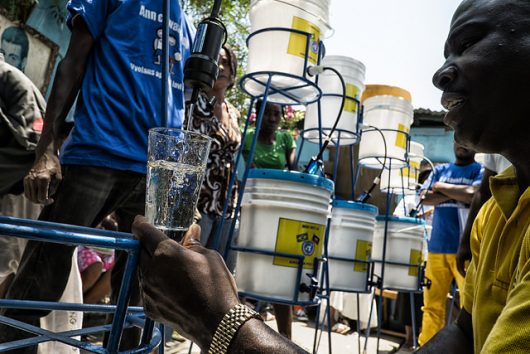 Haiti has long been one of the most impoverished countries in the Western Hemisphere, with a population of 11 million ravaged by earthquakes, hurricanes and epidemics in recent years. Now that the country is entering a new era of relative stability, after last year’s presidential election, government officials and civil society stakeholders are joining forces to improve water access in Haiti, a critical issue that has gone under-reported for years.

Diminished water access in Haiti contributed to the catastrophic cholera outbreak in 2010 which killed almost 9,500 people over several years. The outbreak began when water contaminated with cholera seeped into the River Artibonite from a base manned by U.N. peacekeepers from Nepal, where cholera still has a presence. The Artibonite is the longest and most important river in the country, providing millions of citizens with water access in Haiti.

The State University of Haiti (UEH), one of the country’s most prestigious universities, partnered with the University of Florida (UF) and Haiti’s national water agency, DINEPA, to host a symposium on water access in Haiti. Held on November 16, the conference focused on promoting research in the water sector and spurring creative solutions for the crisis surrounding water access in Haiti.

“The university’s medical college has its own system of water provision, assuring its own autonomy and bringing water to five laboratories that in turn provide water to around 1,000 people every day,” said Jean-Claude Cadet (head of UEH’s medical school) to the leading Haitian daily newspaper Le Nouvelliste.

DINEPA is looking to the university’s self-sustaining system as a model of how to improve water access in Haiti and tackle an equally important problem: ensuring better water quality for the country’s citizens. The conference, held on the university’s campus, concluded with three objectives for the partners to work on together: establishing a water treatment center at UEH’s medical school, reinforcing cooperation between UEH, UF and DINEPA, as well as other participants and, most importantly, establishing a new institute for water access and quality that will eventually produce highly educated graduates dedicated to the goal of creating greater water access in Haiti.