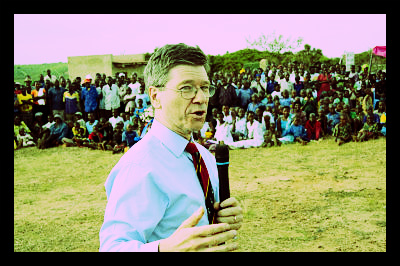 Mr. Sachs strongly believes that sub-Saharan Africa’s geographical and ecological misfortunes and its history of colonialism are the main reason for its struggle with poverty. He further poses that with enough motivation, desire and financial means, the rich nations of the West can, and should, help.

To prove his point—and to set an example for the rest of the world—he began the Millennium Village Project in 2005 with $5 million from a donor. The project provided a group of five villages in Africa with large sums of targeted aid. Each of the five villages served as a test site for “development theory.”

Ms. Munk, a journalist and author, followed Mr. Sachs through these African villages for nearly six years to observe their living conditions and to document the impact the Millennium Village experiment was having on them. She spoke to Ahmed Mohamed, the project’s manager of the village in Dertu, Kenya who used Mr. Sachs’ funds to establish a school, hire a teacher and persuade the local government to build a road connecting the village to the next town 40 miles away. Stores opened, and villagers improved their mud homes with tin roofs.

However, Ms. Munk noticed that Mr. Sachs’ “noble and important cause” did not account for the gap between “development theory” and “the reality on the ground.” She saw the citizens of sub-Saharan Africa struggling to overcome hunger, draught and disease.

Ms. Munk’s experiences led her to conclude that Mr. Sachs cannot help end poverty with large infusions of aid in a region where corruption, draught, isolation, conflict and scare resources tip the scales away from the quest to end poverty.

In one instance during the Millennium Village Project, Dertu experienced an outbreak of malaria. Mr. Sachs mobilized his resources and sent the villagers 3,000 bed nets to prevent malaria. Mr. Mohamed distributed the bed nets, but many of the villagers used the nets on their goats rather than their children. “The livestock has more value than humans” in this region, Mr. Mohamed reported.

A number of African countries have experienced improvement that Mr. Sachs insisted could not happen without foreign aid. Ms. Munk acknowledges that life definitely improved in another village involved in the project, Ruhiira, Uganda and is herself is passionate about understanding the environment in Africa and in helping to improve it. Perhaps the main disagreement between these two philanthropists is about how to do it right.