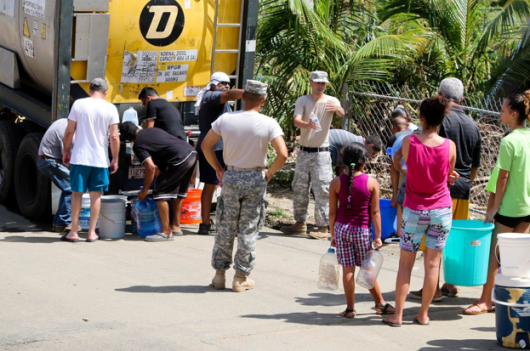 After weathering Hurricane Irma (the largest hurricane ever recorded in the Atlantic) and Hurricane Maria (the fifth largest hurricane ever to hit the U.S.), Puerto Rico is in desperate need of hurricane relief. The island still lacks power, as the storm knocked out 80 percent of the island’s power transmission lines, and the only electricity is coming from generators. Fuel, food and water shortages are creating a massive humanitarian crisis and are driving the urgent need for hurricane relief in Puerto Rico.

The storms affected an already economically crippled Puerto Rico, which is under a regime of debt-driven austerity measures. In May, Puerto Rico declared bankruptcy, and it has since been trying to restructure more than $70 billion in debt. An already stagnating economy will struggle even more under the financial burden of reconstruction after the hurricane.

The call for hurricane relief in Puerto Rico has already been answered, although much more support is needed. Some 5,000 active-duty troops and National Guardsmen members have been deployed to Puerto Rico and the U.S. Virgin Islands. The Federal Emergency Management Agency (FEMA) has 600 people on the ground coordinating relief efforts. FEMA reports that “more than 4.4 million meals, 6.5 million liters of water, nearly 300 infant and toddler kits to support 3,000 infants for a full week, 70,000 tarps, and 15,000 rolls of roof sheeting [have been sent] to the U.S. Virgin Islands and Puerto Rico since Hurricane Maria’s landfall.”

In addition, the current administration granted a 10-day waiver from the Jones Act, a maritime regulation that requires all shipping from one U.S. port to another be carried on American-made and American-operated shipping vessels. This regulation itself is economically draining for Puerto Rico as it drastically increases the price of shipping. A 2010 study by the University of Puerto Rico found that the Jones Act cost the island $537 million per year.

Luckily, the waiver will allow goods to enter Puerto Rico more efficiently; however, the long-term effects of the raised prices in the U.S. territory will still be felt if the Act stays in place. It is unlikely that the Jones Act will be repealed without broad support because President Trump has stated, “We have a lot of shippers and a lot of people that work in the shipping industry that don’t want the Jones Act lifted.”

Hurricane relief in Puerto Rico must be a priority for the U.S. going forward, but it must also be coupled with a renewed sensitivity to the ever-present economic struggles that the small island faces. Puerto Rico is a territory created in the legacy of U.S. colonialism and their short and long-term suffering must be treated with urgency. Hopefully, in the wake of this disaster, the U.S. government will continue to work with Puerto Rico beyond the immediate recovery efforts and towards alleviating the poverty and austerity created by the debt crisis.