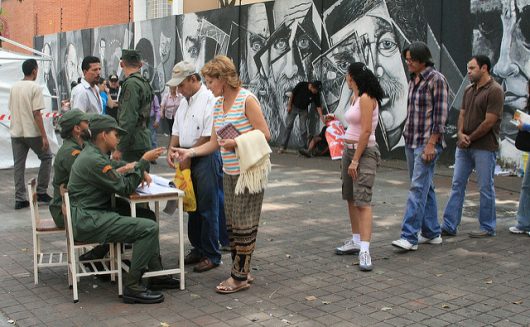 On May 20th the current President of Venezuela, Nicolás Maduro, was re-elected for a second term in office amid a highly controversial election; in fact, one of the largest controversies was food. The country currently experiences one of the worst economic crises in recent history.

Soaring prices and mass shortages of basic goods have left grocery shelves empty and most of the country hungry. According to surveys done by Caritas Venezuela, the Catholic church’s aid agency, 46 percent of Venezuelan’s eat less than three meals a day and 14.5 percent of children under five suffer from acute malnutrition.

Rather than finding solutions to fix the hunger crisis in Venezuela, Maduro exploited it to secure votes in the election alongside a multitude of other autocratic measures. While this creates a dismal outlook for the state, there are still many within the country working to alleviate this issue for everyone.

The dependency on the despondent economic conditions caused many people to rely on government-subsidized groceries to survive. In order to receive these subsidies, recipients must present a special identity card to local councils loyal to Maduro that hand them out. They were also told they must also present this card on election day at polling stations run by Maduro’s party as a check to see who has voted.

At campaign rallies Maduro made the expectation behind this measure quite explicit: “Everyone who has this card must vote…I give and you give.” This falls in place alongside the refusal of the government to accept humanitarian aid to amend the hunger crisis in Venezuela— with some political analysts suspecting this move as a way for Maduro to maintain control over the population.

However, many did not give into this manipulation. Around the country, voter turnout was extremely low, at 46 percent compared to an 80 percent turnout rate in the 2013 election. This trend reflects both a call for the boycott of the election from opposition leaders alongside overall apathy in the electoral process.

Many more have fled in the wake of the election results, on top of the 1.5 million that have left since the economic crisis began in 2014. Besides refusing to recognize the election results, the United States is working to support those that have fled through earmarking an aggregate $16 million over 2018 in funding towards countries in Latin American and the Caribbean that have supported the influx of Venezuelan refugees.

The efforts of those remaining within the country, such as the Cooperatives of Social Services of Lara State (CECOSESOLA), illuminate who is truly giving to Venezuela’s development. Originally founded in 1967, CECOSESOLA today is a non-hierarchical network of over 50 cooperatives and grassroots organizations of about 20,000 members in the Venezuelan state of Lara.

The collaboration offers a range of important amenities such as healthcare, community-backed loans, funeral services and an alternate supply chain for food. Its food distribution service in particular extends to five states within the country and offers savings of 30-50 percent compared to market value of most goods.

CECOSESOLA have stepped up even further in response to the current hunger crisis in Venezuela. In 2014, the group would see 40,000 people at their weekly Family Consumer Fairs; today, that number has increased to 150,000. Accordingly, CECOSESOLA has worked to increase the number of perishable products they distribute weekly from 500 to 800 tons. In order to meet such demand, over 300 cooperative workers (in total) facilitate these fairs Thursday-Sunday, with days sometimes as long as 14 hours.

The moving force behind CECOSESOLA’s dedicated efforts to the public are illuminated by interviews conducted between 2012 and 2013 of Gustavo Salas, a CECOSESOLA member of over 40 years and active food market participant: “We cannot treat our counterparts like things that we want to profit from. We must perceive the entire person. In order to do that, we need transparency, honesty, and responsibility. They are the basis for trust, and that is fundamental. Because trust is the foundation for what we call ‘collective energy.’…That is why we say that our process is limitless. We show that is it possible to relate to other people in a different way.”

CECOSESOLA holding together against all odds makes the process truly seem limitless. Between the devastation from the economic crisis, the government’s refusal to accept outside aid, and the most recent election fiasco is setting Venezuela down a trajectory towards becoming a failed state.

The success of CECOSESOLA demonstrates that perhaps the country is not as close to complete economic and social collapse at the grasp of Maduro’s unchecked self-indulgence as it may seem. It’s paving another road where it is indeed “possible to relate to other people in a different way.” The small victories of collective self-sufficiency are combating the hunger crisis in Venezuela and putting the country back into the hands of its people.