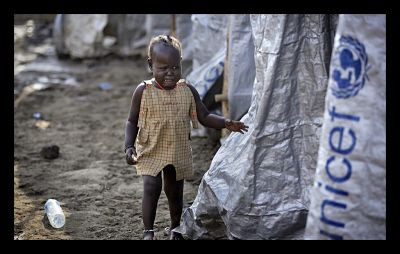 This fall will not be a bountiful season for the world’s youngest country, according to recent warnings from several British foreign aid agencies. Four million people – including 50,000 children under five years old – are likely to be left hungry from August through November as South Sudan undergoes what its president, Salva Kiir, describes as “one of the worst famines ever.”

Political unrest in South Sudan has been rampant for over six months as warring factions fight to secure control of the government. The turmoil has already left thousands dead, caused nearly a million people to flee some of South Sudan’s more violent areas, preventing farmers from planting crops. Civil strife also complicates the distribution of foreign aid, making the upcoming famine even more dangerous for South Sudanese people.

The dangers aren’t stopping humanitarian organizations from trying to mitigate the effect of the imminent hunger crisis in South Sudan. The agencies that predicted this crisis are the same ones that predicted the famine that swept through Somalia in 2011. Having learned from the event in Somalia that public interest is crucial to financing this sort of humanitarian work, those agencies are trying desperately to drum up significant media coverage before South Sudan’s food crisis takes effect.

Lack of public awareness of Somalia’s famine – which was the worst of the century – left humanitarian organizations lacking in both private donations and government support. If such organizations are more successful this summer in obtaining the necessary finances necessary to implement targeted food aid programs in South Sudan, they could save hundreds of thousands of lives. The United Nations currently has approximately 40 percent of the funds it would take to prevent the food crisis, but over a billion dollars is still needed.

In June, South Sudan led The Fund for Peace’s list of the world’s most fragile nations. Because a famine as huge as this one can only further weaken the nation, it’s imperative that aid organizations do as much as they can to prevent such a food crisis from occurring in the first place.

Education in ColombiaMNS Disorders in Developing Countries
Scroll to top