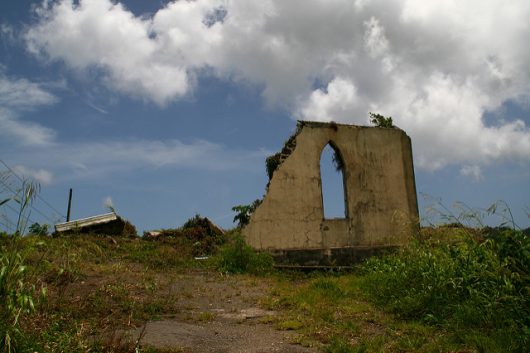 In September 2004, Hurricane Ivan tore through Grenada, leaving 90 percent of homes ruined, causing over three dozen fatalities and freeing an unidentified number of convicts when a prison was destroyed. With constant looting and marauders on the loose, people left on the island felt extremely unsafe. Grateful for outside assistance, countries’, such as Trinidad, troops were sent in to reinforce order and support police officials.

In the aftermath of Ivan, humanitarian aid to Grenada not only came from many contributors but also remains as one of the most covered topics in the country’s history. Mexico sent over 34.5 tons of humanitarian aid, including food and construction material while the Red Cross sent 22 tons containing generators and hygiene parcels.

Damages estimated about $1 billion throughout the entire island. The European Commision provided 1.2 million euros in recovery support in September 2005, a few months after category 2 Hurricane Emily passed. The funds assisted in rehabilitating or strengthening homes and offered training on how to cope with future disasters. Venezuela provided $1 million, first aid and rescue teams to assist with humanitarian aid to Grenada.

Focusing on children, UNICEF placed their efforts into improving and ensuring children’s education as well as health systems. Salvaging damaged schools and getting children back to a normal routine served as crucial components of the organization’s aid goals. “It is imperative that children return to school as soon as possible, not just to continue their education, but to give them a sense of normalcy to their topsy-turvy lives,” said Jean Gough, UNICEF Representative for Barbados and Eastern Caribbean.

Thanks to UNICEF’s efforts, the psychological program “Return to Happiness” was created and provided to children living in shelters. Through puppet play, child-to-child methodology and songs as a means of psychological recovery, children of Grenada were taught coping methods to deal with calamitous events.

From various countries’ and organizations’ efforts, humanitarian aid to Grenada after Hurricane Ivan was received and immediately implemented. Although the initial aid provided did not cover the estimated damage at the time, Grenada as a whole was uplifted by kindness and continues to be ever since.