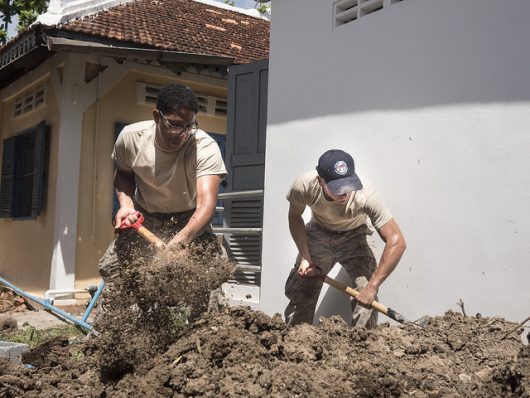 During the 1970s, Cambodia went from one of the most thriving economies in Southeast Asia to one of the poorest countries in the world. Although overthrown by 1979, the Khmer Rouge regime had already done damage to the economy by cutting access to education, eradicating free markets and stifling individuality. The country was haunted further by the mass genocide and government corruption carried out by the regime, leading to a need for restructuring for almost an entire decade following the devastation.

As of 2014, Cambodia has been recognized as being one of the best performers with respect to reducing its poverty rate. Both citizens and developed countries have contributed humanitarian aid to Cambodia, which has helped address poverty rates in the country.

In 2016, 80 U.S. troops were sent to Cambodia by the humanitarian aid group, Pacific Angel. This is the fourth Pacific Angel mission held in Cambodia since its 2007 establishment. This mission focuses on the rural province of Kampot, providing aid through healthcare, school supplies and civil-engineering projects.

Another leading contributor of humanitarian aid to Cambodia is Australia, remaining one of the most significant bilateral grant-based donors. Australia’s provision of official development assistance from 2015-2016 to Cambodia was AUD $92 million. The three main objectives of Australia’s aid are: providing better health and education, improving access to infrastructure and increasing agricultural productivity.

Through each sector, a focus on women’s empowerment, disability, governance and inclusive participation will be implemented. Australia’s target is to drive growth in the economy through working with private sectors, as well as to achieve aid for trade by 2020.

As a result of the aid provided by Australia from 2015-2016, 500,000 Cambodians in rural areas received greater access to jobs, food and higher incomes while creating higher investments. Cambodians also received more access to land and experienced increases in crop production. Over 9,950 women and their families received counseling, shelter and legal aid. Rehabilitation was provided to over 31,000 disabled citizens through a strongly executed disability-precise program.

Caritas, a nonprofit organization, also provides humanitarian aid to Cambodia which benefits young people dealing with disabilities. While assisting individuals in the job market and supporting their inclusion in society, Caritas also aims to also address local poverty in Cambodia.

Cambodia has come a long way from the late 1990s and is slowly regaining success in its economy. Though poverty has not been completely eliminated, with the help of humanitarian aid Cambodia is sure to see the poverty rate continue to decrease each year.