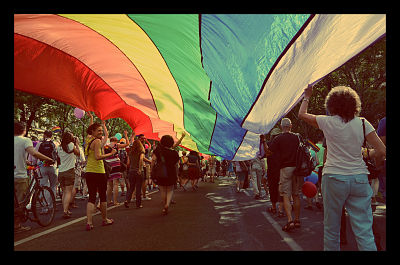 When it comes to poverty, being a victim of gross and systemic inequality increases your vulnerability and risk of being impoverished. When human rights are threatened or denied the risk of poverty rises as a group of people face discrimination through barriers to basic rights, needs and dignities. This gross societal exposure without protection leaves individuals and communities vulnerable to all the parallels of structural violence that make one poor. LGBT(QIA) individuals face discrimination and harassment every day and through this disenfranchisement face a greater risk of living in poverty or having their economic rights violated.

When controlling for a number of factors associated with poverty, rates for LGBT(QIA) adults are higher than for heterosexual adults.

This should not be surprising to anyone. LGBT(QIA) people are born into all types of families including those who are poor. In addition to facing the same socio-economic challenges that other people who share their sex, race, ethnicity, age, and disability face, LGBT(QIA) individuals also face unique obstacles because of their sexual orientation and gender identity.

The additional obstacles faced by the LGBT(QIA) community include a higher risk of being homeless when younger; harassment and discrimination at school and at place of employment; being denied the economic benefits and protections of marriage; losing the emotional and financial support of family and being denied gainful employment because of gender or sexual identity.

Even within already marginalized groups, LGBT(QIA) individuals face additional barriers or discrimination and are even more likely to be poor. Twenty four percent of lesbians and bisexual women are poor, compared with only 19 percent of heterosexual women.

According to the National Transgender Discrimination Survey, “transgender people are four times as likely to have a household income under $10,000 and twice as likely to be unemployed as the typical person in the U.S. Ninety percent of those surveyed reported experiencing harassment, mistreatment, or discrimination on the job. Almost one in five reported being homeless at some point in their lives.”

Being LGBT(QIA) can have very real consequences in the workplace. Throughout the country, there are no explicit laws or mechanisms that prohibit employers discriminating against a person based solely on LGBT(QIA) identity.

LGBT(QIA) individuals face barriers such as unwarranted background checks, inadequate workplace protections and unequal pay. These types of discriminatory practices continue to make it difficult for LGBT(QIA) workers to financially provide for themselves and their families.

Just recently the United States Senate passed the trans-inclusive S. 815: Employment Non-Discrimination Act of 2013 or ENDA. The first bill of its kind to offer protections to workers based on gender and sexual identities. The bill seeks to prohibit employment discrimination on the basis of sexual orientation or gender identity but still has to pass the House to be fully enacted and effective.

LGBT(QIA) rights don’t just offer protections to a given community, but are strengthening the rights of all individuals to be protected by law from workplace discrimination or any other kind of disenfranchisement based on sexual or gender identity. When employment is more equitably accessed and when economic rights are no longer privileges, we all can enjoy a safer workplace and more guaranteed access to economic and other rights as well.