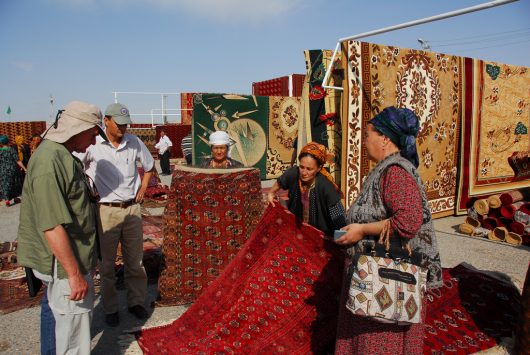 Turkmenistan is smaller than the United States in just about every regard–except one. It possesses the world’s fourth-largest reserves of natural gas, surpassing the U.S. and ranking just below Iran, Russia and Qatar. As its leadership turns to China for investment in its energy sector, the U.S. is poised to lose much of its economic clout in the region. If the U.S. were to invest in Turkmenistan’s infrastructure, U.S. benefits from foreign aid to Turkmenistan (beyond lifting its people out of poverty) would include a less corrupt, diversified economy friendlier to U.S. business and interests and one less state reliant on fossil fuels.

With the current state of affairs, Turkmenistan is one of the most corrupt countries in the world. Freedom House, a U.S. government-funded human rights advocacy group, gave the landlocked country of six million people a score of 6.96/7 on the Democracy Score, with 1 being the most democratic and 7 being the least. Turkmenistan president Gurbanguly Berdymukhamedov announced the creation of an anti-corruption agency in June 2017, but his appointee was a former official in the customs service, which is known to be a hotbed of political bribery. The president himself is also suspect; in 2008, a Russian energy company “gifted” him a private yacht worth €60 million ($88 million). Berdymukhamedov also received various luxury vehicles from German automobile companies, including a Mercedes Maybach.

While one might not see the U.S. benefits from foreign aid to Turkmenistan because of the corruption, investment in fighting corruption and diversifying the market could reap good results. There has been nominal recognition by Turkmenistan’s government that market reform and diversification away from natural gas is beneficial. With relatively few stakes in Turkmenistan, the U.S. could be doing more.

While these steps may not enact immediate change, their potential to remains a better alternative than the current status quo. The possibility of a prosperous, cleaner and relatively less autocratic Turkmenistan is far preferable to a polluting regime heavily reliant on foreign subsidies, interests and global energy prices.