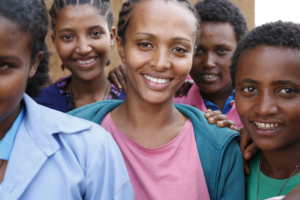 Child marriage is impeding the development, well-being, and life choices of young girls around the globe. In the past ten years, child marriage has emerged as one of the most ignored human rights violations and has only just started to receive attention. The United Nations Population Fund (UNPFA) estimates that if current patterns continue, more than 100 million girls in the developing world will be married during the next 10 years. In Africa, over 42 percent of girls are married before age 18, with millions of girls given away before even reaching puberty. Although boys may be married as children as well, the issue is found to be more prevalent and detrimental for girls.

Child marriages violate many human rights including the right to education, reproductive rights, freedom from violence, access to reproductive and sexual health care, freedom of movement, employment, and the right to consensual marriage. According to UNFPA, over 40 countries around the world have a prevalence of child marriage of 30 percent or higher. Of these, 31 are African countries.

The health and well-being of girls are directly threatened when they become married. Complications from pregnancy and childbirth are the main causes of death among adolescent girls between ages 15 and 19 in developing countries. This is large because the pelvis and birth canal are not fully developed and complications in labor are worsened by the scarcity of health services.

Child marriage also usually results at the end of a girl’s education as they are expected to take responsibilities at home a priority. This lack of education limits girls’ opportunities and choices for the rest of their lives. Research shows that limited education can trap women and girls in poverty when their spouses die, abandon, or divorce them. Without education, how can an individual be expected to financially provide for themselves and their families?

A two day East African regional conference that focused on the problem of child marriage concluded that girls married early are more likely to experience violence, abuse, and forced sexual relations. In many countries, marital rape is common because it is not recognized by law as a crime, leaving the child brides more vulnerable and at a greater risk of HIV/AIDS infection. Married girls between the ages of 15 and 24 years are more likely to be HIV positive than unmarried girls in the same age bracket.

“(Activists) are advocating to change the personal status laws as they discriminate against women and aim to keep them in the household,” said Khadija Al-Dowahi of the Sudanese Organisation for Research and Development (SORD). Sudan’s 1991 Personal Status Law of Muslims does not grant women equal rights, and even promotes child marriage. Article 40 of the personal status law sets no age limit for marriage and states that a girl at the age of 10 can be married “with the permission of a judge”.

As the painful truth of child marriage emerges as one of the more pressing humanitarian concerns of our time, the hope is that governments and organizations will work to fulfill the rights of girls to live free from physical, mental, and sexual harm. There are ways that governments can mitigate some of the worst abuses brought about by child marriage. The emerging consensus of international human rights standards is that the minimum age of marriage should be 18, which would protect both girls and boys from child marriage. Along with this, verification of full consent of both spouses should be required and perpetrators of forced marriage should be prosecuted.

Today, lawyers and human rights activists are calling for a change in-laws, which sometimes allow for the marriage of girls as young as 10. They say it is time for the laws to recognize gender equality so that girls and young women can control their lives and leave behind the cycle of child marriage and abuse.