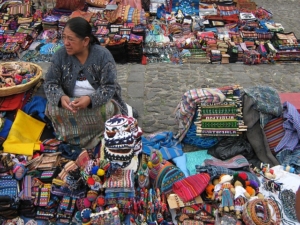 Guatemala is a country made up of six primary ethnic communities, though the population mostly comprises people belonging to the Mestizo and Maya ethnic groups. These ethnic groups are generationally skilled in creating traditional forms of art, which include weaving, beading and embroidering. Over half the Guatemalan population lives in a highly populated southern mountainous area. Within this region also live the majority of communities that experience poverty in the country. Many individuals from ethnic communities in this region use art to leverage themselves out of poverty.

While Guatemala’s GDP has increased by an average of 3.5% over the past five years, high rates of poverty still exist within the country. 59.3% of the Guatemalan population (9.4 million people) live below the poverty line. In surrounding Latin American and Caribbean (LAC) regional contexts, the average per capita growth is 1.6%. Due to high population growth rates since 2000, Guatemala’s recent annual per capita growth is only 1.3%. High population growth rates are, in part, caused by a young population, with a median age of 23.2 years.

Guatemala also experiences lower rates of literacy among women than men. As of 2015, 87.4% of men and 76.3% of women were literate in Guatemala. Between 2002 and 2014, literacy rates among women improved by 13.03%. In recent years, organizations like MayaWorks have worked to address the low literacy rates among women in Guatemala. MayaWorks is a non-profit organization that partners with women from rural communities to transform artisanal skills into sustainable businesses. Across 125 partnerships that MayaWorks has established with skilled Guatemalan artisans, over 40% of women are reported to have never received a primary education — and therefore lack literacy skills. Through one program, MayaWorks offers women in rural Guatemala access to primary education to improve their literacy. Business and literacy training programs enable women to not only improve situations for their families and communities, but also to decrease overall rates of poverty in Guatemala.

MayaWorks has shared stories of how business and literacy training programs can relieve women suffering from poverty in Guatemala. The Tz’utujil indigenous group makes up 30% of the Maya ethnic population and is primarily situated in a rural highland region of Guatemala. Women from this ethnic group are skilled in creating Maya-style crafts, including cultural staples such as crochet, hand weaving and treadle foot loom weaving. With the help of MayaWorks, over 52 Tz’utujil women from Santiago Atitlán are leveraging their artisan skills and sharing their cultural forms of expression with businesses in the United States. These partnerships allow for extended solutions to both local and national poverty in Guatemala through international support. Meanwhile, the international business of Mayan artists is strengthening relations between Guatemala and the United States.

The work of Mayan artisans, combined with the financial and educational support of MayaWorks, has already begun to alleviate poverty in Guatemala. Overall literacy levels for Guatemalan women have increased, which has also led to the employment of more women within the country’s workforce. According to the World Bank, employment rates for women in Guatemala have increased from 23.24% in 1999 to 40-45% in recent years. On a localized level, many women are now able to obtain security for their families and communities. Above all, working with MayaWorks equips women to be self-sufficient in running businesses and managing finances. This results in a generationally sustainable, long-term solution for reducing poverty in Guatemala.

Slums in Ghana: Challenges with Growth Charitable MLB Players Give Back to Home Countries
Scroll to top