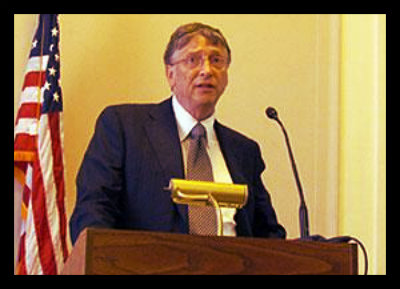 At the International Agriculture and Food Security Briefing, Bill Gates stated that if we want to succeed in ending world poverty, we have to invest in agriculture. Gates explains that “of all the interventions to reduce poverty, improving agricultural productivity is the best.”

Gates explains how during the green revolution there was a huge increase in productivity. There was a movement that encouraged farming and an increase in agriculture around the world. But he also says that Africa didn’t see any noticeable results from the green revolution because of the diverse ecosystems. If we can increase productivity in the poorest regions, where many people are farmers, we can see amazing results in the forms of more income, better health, and high percentages of children going to school.

“All the other different economic activity—yes it trickles down. But nothing as efficiently as in agriculture,” says Gates.

During his speech, he also claimed that agricultural research is important to make sure farmers are getting the resources they need to produce more. And while in the past the United States played a large role in doing research and providing food aid, in recent years the amount of research has remained stagnant, which contributes to the problem.

Gates also explained that one factor that is especially important to bettering the world through agriculture is dedication. He and his wife visited Tanzania to see first-hand how the US’s dedication is helping small-holder farms. He had met with a woman whose income doubled because of the support provided by the US and was a perfect example of how we have the ability to drastically improve lives. Seeing the changes can encourage everyone to continue to contribute and do what they can to help struggling farmers.

History of the IMFTop 10 Global Health Blogs
Scroll to top