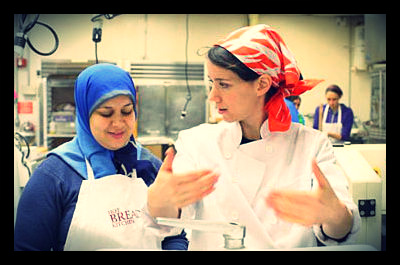 Foreign-born and low-income workers have the opportunity to become financially independent through a culinary career at Hot Bread Kitchen (HBK) in New York City’s Spanish Harlem.

Due to a lack of English fluency or professional networks, immigrants are often forced to the periphery of society. HBK works to build a world where immigrants are accepted into mainstream culture and honored for their work. In the kitchen, the foreign-born workers are not only improving their English language skills, but learning about commercial baking and management.

Since its launch, HBK has trained 22 women from 11 different countries, and it has incubated 15 small businesses.

The bakery offers Project Launch, a paid on-the-job training program, and HBK Incubates, a small business incubation program. Most of the workers grew up learning how to bake traditional breads from family recipes, and the training programs are funded by the sale of multi-ethnic breads made by the bakers using local and organic ingredients.

Project Launch is an intensive workforce training program in artisanal baking and English fluency for foreign-born and low-income minority women. Participants in the program receive up to 35 hours per week of on-the-job bakery training, 16 hours of customer service training and three hours of English fluency classes.

After an average of nine months, the women are placed in management track positions in the culinary industry or advanced to the HBK Incubates, which helps them launch their own businesses. For those transitioning into professional positions, household wealth is improved, with salaries increasing an average of 106%.

Nancy Mendez started making tortillas by hand when she was 10 years old, but she could not afford professional cooking school in Mexico because of the cost. She now makes Mexican corn tortillas for HBK based on her grandmother’s recipe. Mendez, who moved to the U.S. almost 14 years ago, now runs the entire tortilla production process at HBK. The tortillas are sold at weekly farmer’s markets in New York and at small shops. The breads sold at HBK vary, from foccacia to rye and challah to lavash crackers; the bakery also sells granola. The tortillas are one of the bakery’s most popular items.

HBK is not the only non-profit kitchen that doubles as a training center — La Cocina in San Francisco and Hope & Main in Rhode Island are also kitchen training centers in addition to commercial enterprises. However, HBK is unique in that is pays its bakers for class time.
HBK products are sold at retailers all over Manhattan, Brooklyn and online.