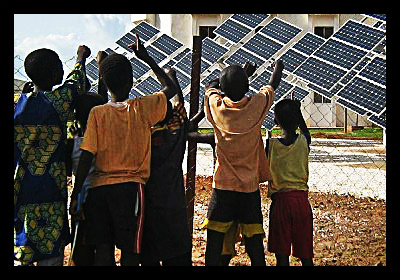 Imagine living in a medical world where there are hospitals, doctors, and nurses, however there is no electricity. This world is currently Gambia. Gambia is a country in western Africa, and one of the only things holding them back from having a successful medical field is a lack of electricity.

The electricity shortage results in many problems such as nurses having to assist patients by candlelight, emergency surgeries are impossible, drugs and vaccines dependent on refrigeration are ruined, and people cannot get supplemental oxygen from oxygen concentrators.

Kathryn, a U.S. medical student visited Gambia to help provide medical assistance and witnessed the devastating effects of the electricity shortage first hand. Kathryn was observing a routine caesarean section, however when the baby was delivered it was only 3.5 pounds and was unable to be revived. The doctors said that if the hospital had proper electricity, this death could have been avoided, because they would have had the ability to have used an ultra sound machine and detected that the baby was underweight. The baby could have also survived had the hospital had access to incubators.

Gambia has been working towards establishing solar energy, and they have high potential in the development of solar power and solar thermal technologies. The Gambia Renewable Energy Centre has been established, and their goals include promoting the use of renewable energy, advising the government on renewable energy techniques and carrying out adaptive research.

However, Gambia is facing quite a few financial constraints. Their constraints include high capital cost, high transaction cost, and lack of dedicated financing for renewable energy in the banking institutions. The financial resources necessary for Gambia to have electricity for the next three years is $112.5 million.

In comparison, the U.S. is the world leader in energy waste. On average the U.S. wastes 57 percent of the energy they use, and this costs businesses and households an estimated $130 billion yearly. However, the U.S. is also spending billions of dollars on green initiatives and sustainable energy, though only within the country’s limits. President Barack Obama created a green stimulus package, and from 2009-2014 it is estimated that the government will spend over $150 billion on green initiatives, including $100 billion going directly towards renewable energy in the U.S.

With such an abundance of energy in the U.S., it is shocking to see the lack of energy globally. U.S. leaders need to recognize the need for electricity worldwide and consider applying the developments being made towards renewable energy to countries such as Gambia that are in dire need for it.