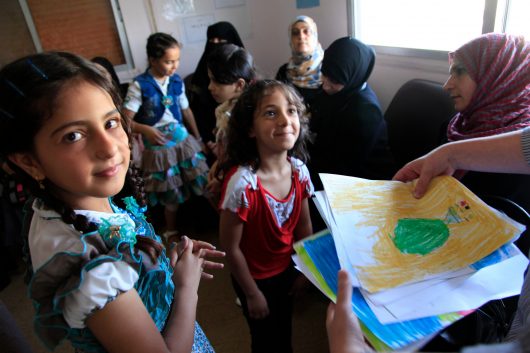 At the May 2016 World Humanitarian Summit, the International Rescue Committee (IRC), a global nonprofit organization, entered into a partnership with the Sesame Workshop. They will work to bring quality TV content to help educate refugee children.

Out of the 60 million refugees in the world, approximately half are small children. However, preschool services are incredibly rare in refugee camps, leaving young children idle. Whether it be due to bombings, war or the death of a loved one, refugee children are not given the tools necessary to confront such harsh circumstances.

The Sesame Workshop will use its seasoned experience in child entertainment to promote valuable skills. This workshop will also help refugee children cope with hard times. As with all of their content, this Sesame Street program will also be accessible to adults. The program plans to strengthen the children’s experience by including their parents.

The IRC is a longstanding organization that dedicates itself to global emergency response and aid in areas like health, safety and education. The group formed in 1933 with the help of Albert Einstein. Since then, the Committee has helped over 40 countries and 26 U.S. cities. The IRC plans to establish the Sesame Workshop’s content in schools, refugee camps and areas of conflict.

The refugee program will feature Sesame Street’s regular stars like Elmo, as well as new characters. Zari, a young girl from Afghanistan, is one such new character. As the first Afghan Muppet, Zari works to empower young girls and to promote girls’ access to education in places lacking in opportunities.

A test run of the program was launched in March 2016 at the Zaatari refugee camp in Jordan. Pilots for the program have also been scheduled in regions near Syria and possibly East Africa.  Ultimately, the IRC and the Sesame Workshop refugee program hope not only to make an impact on refugee aid but also to spur the creation of similar programs that will further educate refugee children.

Movies About Ebola: A History of the Disease’s Film Coverage Five Ways to Help End Poverty in the United States
Scroll to top