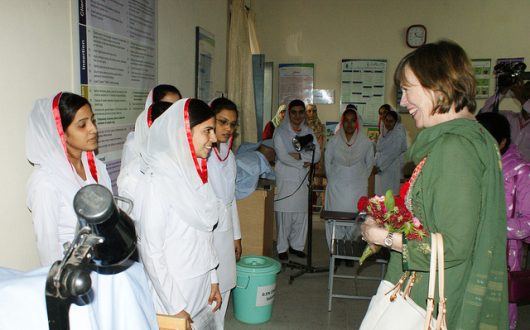 Throughout Pakistan, the United States Agency for International Development (USAID) is changing healthcare accessibility. Construction of the first Burns, Trauma, and Reconstructive Surgery Centre in Peshawar of Khyber-Pakhtunkhwa, Pakistan began in 2010. Khyber-Pakhtunkhwa’s government and its Workers Welfare Fund (WWF) funded the center’s construction and was to provide new equipment.

The WWF was responsible for the center’s basement, ground and first floors. With the total budget for the project being Rs1 billion, the WWF pledged Rs600 million. The project was to be completed in 2012, but construction was put to a halt after the WWF confirmed a lack of funds, leaving the center 80 percent complete.

Meanwhile, patients needing emergency care were traveling further than necessary to Kharian, Punjab. Year after year, the Khyber-Pakhtunkhwa government and the WWF delayed construction, creating increasing discontentment. Medical personnel were outraged, having seen that The Pakistan, Afghanistan, Tajikistan Integration Foundation had managed to build three burns and plastic surgery units in one year. The USAID signed a Memorandum of Understanding to provide Rs1.6 billion for the 120 beds needed to complete the Burns, Trauma, and Reconstructive Surgery Centre and agreed to complete construction within a year to increase healthcare accessibility, assuage dissatisfaction and restore optimism.

The USAID is assisting Pakistan in other ways as well. In the Malakand Division of Khyber-Pakhtunkhwa and the Federally Administered Tribal Areas (FATA), the USAID is improving healthcare accessibility for mothers and their children by funding the Pakistan FATA/KP Health Initiative. In their current situation, women in the Malakand Division and FATA cannot receive health services from male medical personnel. They are often unable to reach health facilities because of low transportation options or the health facilities within their proximity cannot manage complicated childbirth cases.

While there is still much work to be done in the future, it is encouraging to see progress being made toward Pakistan’s healthcare accessibility by organizations like the USAID.

Truth About Poverty in Chile Why is Kosovo Poor, and How Are the Poor Being Helped?
Scroll to top