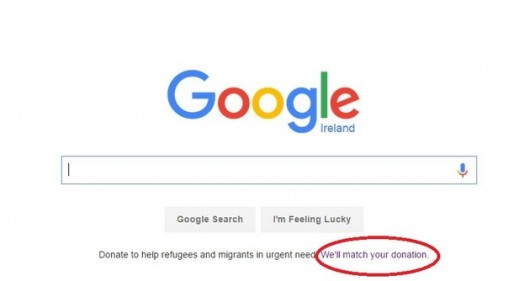 Eastern Europe has become overwhelmed with migrants, waiting to board trains to Germany and other European countries.

German Chancellor Angela Merkel has been working with the EU diligently to create protocols and ease overstretched countries like Greece and Italy by spreading out new arrivals.

Most refugees are headed to Germany, where the country has made it clear they are accepting refugees giving them opportunities to build their lives. Other countries, such as Hungary, have completely shut their doors to fleeing refugees and have threatened to jail illegal refugees caught trying to cross into the nation.

Google, one of the most influential companies in the world has created a campaign to match donations for refugees in crisis. The campaign is called “onetoday”. Google hopes the campaign will inspire greater giving amongst humanity.Google has offered to match donations up to $5.5 million in user donations with tax deductions for U.S. citizens.

The funds will be split evenly between four organizations that Google feels have strong track records of successfully providing aid and have been on the front line since day one. These organizations include Doctors Without Borders (DWB), International Rescue Committee, Save the Children, and the United Nations High Commissioner for Refugees (UNHCR).

Refugees and fleeing migrants are in desperate need of medicine, clothing and food. The four organizations are working in unison to address the different needs. DWB is providing refugees with everything from psychological care and is committed to set up hospitals in refugee camps as well as helping women give birth safely.

In addition, International Rescue Committee is providing relief to refugees reaching the shores of Greece as well as Afghanistan and Syria. They also help resettle thousands of refugees every year in the United States.

Save the Children is another organization that has been working on providing shelter kits and sustainable foods. UNHCR has been working particularly with the Syrian refugees to provide life-saving assistance such as protection, shelter food, and receptions centers where refugees can be registered.

The response and outpouring has been overwhelming but more support, aid and love is needed in a hurry to deal with the migrant crisis.